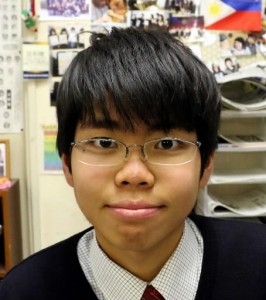 Yuta Takahashi, 15, a third-year student from Eishin Junior High School, located in the city of Fukuyama in Hiroshima Prefecture, has been awarded a special prize by the president of the National Federation of UNESCO Associations in Japan for an essay he wrote in a national essay contest for junior high school students on the theme of international understanding and cooperation. For the contest, which is sponsored by the Ministry of Foreign Affairs of Japan and the U.N. Association of Japan, students were asked to reflect on the role of the United Nations. A total of 3,228 essays were submitted from across Japan, and four students, including Mr. Takahashi, were winners of the special prize, which was the highest prize awarded.

In his essay titled “What Japan should do for the United Nations to realize a world free of nuclear weapons,” Mr. Takahashi proposed establishing a space at the U.N. offices to share the accounts of A-bomb survivors in multiple languages. He argued that this step would help convey to the world the voices and wishes of the survivors, who believe deeply that no others should ever experience similar suffering, and contribute to realizing a world free of nuclear weapons.

He also wrote about his experience of an A-bomb survivor expressing appreciation for his efforts. When he was taking part in a campaign to collect signatures in support of nuclear abolition, one survivor said, “If people like you don’t take this sort of action, there may be more wars or atomic bombings. Thank you.” As he wrote the essay, Mr. Takahashi received advice from fellow members of the school’s human rights club and completed his submission in about a month and a half.

In addition, four winners of the special prize will be traveling to New York to visit U.N. headquarters and other places next March. Mr. Takahashi expressed excitement about the trip, and said, “The world is facing many challenges, like poverty and war. I look forward to visiting the United Nations and considering the role that Japan should play.”