Hiroshima of South Korea, 70 Years After the Atomic Bombing: Part 1 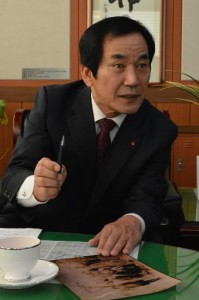 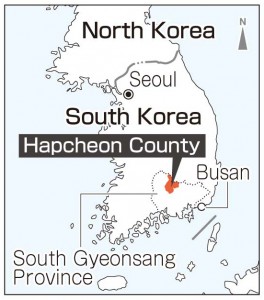 During the colonial days of Japanese rule, many poverty-stricken people living in Hapcheon County in the mountainous region of South Gyeonsang Province, South Korea, moved to Hiroshima to look for work. There, unfortunately, they experienced the atomic bombing and were exposed to the A-bomb’s radiation. Hapcheon is often referred to as the “Hiroshima of South Korea” because of its large population of A-bomb survivors. After these Korean nationals returned to their homeland, they were left out of the Japanese government’s relief measures for A-bomb survivors for many years. The staff of the Chugoku Shimbun traveled to Hapcheon at the end of this year, which marks the 70th anniversary of the atomic bombing, to find out how the memories of Korean A-bomb survivors are being handed down and consider what roles the A-bombed city of Hiroshima can play.

Hapcheon County is located about two hours by car from Busan, South Korea’s second largest city. The population of the area is currently about 50,000, roughly one quarter of the population of 50 years ago. As with communities in the Chugoku mountain region of Japan, Hapcheon has been suffering from depopulation. In 2016, the county will begin constructing a museum to display the damage caused by the atomic bombing at a total cost of 2.1 billion won (about 210 million yen). Ha Chang-hwan, 66, the mayor of Hapcheon County and a second-generation A-bomb survivor, talked about the significance of the museum and expressed hope that many people in South Korea will visit the museum to know about the hardships of the Korean A-bomb survivors and their families.

Museum to be completed in June 2017

An opportunity to think about history

“Survivors are survivors no matter where they live.” In September 2015, Japan’s Supreme Court handed down a ruling which states that the full reimbursement of medical expenses pursuant to the Atomic Bomb Survivors Relief Law must apply to A-bomb survivors living overseas. In line with this ruling, the Japanese government will begin a new support system for A-bomb survivors in January 2017. This ruling will help resolve the last-remaining issues surrounding the disparities in support for survivors living in Japan and those living overseas, and has been well received by the people of Hapcheon.

There still remain, however, disparities in the support received by survivors in different regions in South Korea. Hapcheon County is implementing its own program to provide health counseling and advice regarding exercise for second- and third-generation survivors in response to requests from their parents. South Gyeonsang Province enacted an ordinance to support A-bomb survivors in 2012, providing the Hapcheon County program with financial assistance.

Hapcheon County has an A-bomb Sufferers Welfare Center, the only nursing home for atomic bomb survivors in South Korea, and there are more than 100 survivors waiting to enter the facility. Jegal Jongyong, the county’s welfare policy section manager responsible for the support given to the A-bomb survivors, said that the enactment of a national law would allow for the establishment of a more egalitarian way of providing such support.

In Korean society, this perception of history is deeply rooted: The atomic bombings of Japan by the U.S. military were the result of the war that Japan waged and we have nothing to do with it. This year, which is the 70th year since the end of the war is also, for the Korean people, the 70th anniversary of their liberation from Japan’s colonial rule.

Mayor Ha, his parents, and more than 10 relatives were exposed to the radiation of the atomic bomb in Hiroshima. His uncle’s first son, Ha Chandu, who was a first-year student at Hiroshima Prefectural Technical School (now, Hiroshima Prefectural Hiroshima Technical High School), was mobilized to help tear down homes near the hypocenter and was killed there. Mr. Ha said that his uncle hated to hear the word “atomic bomb” right up to his death, and expressed hope that the new museum will give visitors an opportunity to think about the history of the Korean people who suffered as a result of the war, and to also know the facts behind the dropping of the atomic bombs on Japan.