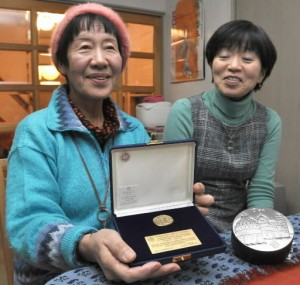 Toshiko Tanaka, 77, an enameling artist and a resident of Higashi Ward, Hiroshima, who shared her A-bomb experience with people in Italy in connection with the 70th anniversary year of the atomic bombing, has been awarded the “Woman for solidarity” prize by the city of Pisa, Italy. The award is given to a woman who has been dedicated to volunteer efforts. Renewing her commitment to her work, Ms. Tanaka said, “This prize has reaffirmed for me that the accounts of the A-bomb survivors are now more important than ever. I plan to continue conveying the terrible nature of nuclear weapons to people in Japan and overseas in the future.”

From November 6 to 15, Ms. Tanaka visited Italy as a featured guest for an event titled “Pisa will never forget Hiroshima and Nagasaki,” which was hosted by the city of Pisa and the University of Pisa. She spoke about her A-bomb experience a total of 13 times in five Italian cities including Pisa. She talked not only about the destructive power of the atomic bomb but also its aftereffects, and stressed that many survivors, including herself, continue hoping that nuclear arms will be abolished.

Because there has been a strong call for nuclear abolition in Italy, local citizens, including a researcher in physics, listened closely to Ms. Tanaka’s account and showed keen interest. At the large auditorium at the University of Pisa, which offers a program in peace studies, the audience stood and applauded when she appealed for cooperation between A-bomb survivors, who have suffered from the impact of nuclear weapons, and nuclear researchers, saying that this would bring about the most effective efforts for peace.

The prize established by the City of Pisa was created to commemorate three volunteer women of a U.N. rescue party who were killed in a plane crash in 1999 when flying from Pisa to Kosovo in the aftermath of the conflicts in that region. Marco Filippeschi, the mayor of Pisa, presented Ms. Tanaka with a medal and thanked her for sharing her experience.

Yukari Saito, 56, a resident of Pisa and a translator who has been working to address issues of peace, the environment, and human rights and helped to facilitate Ms. Tanaka’s visit to Pisa, said, “Ms. Tanaka’s account of overcoming hardships has given courage to the Italian people.” Ms. Tanaka commented, “In my mind, I was given this prize thanks to the support from many other A-bomb survivors and the people around me. I want to persist in raising the alarm so that people in Japan will show more interest in abolishing nuclear weapons.”