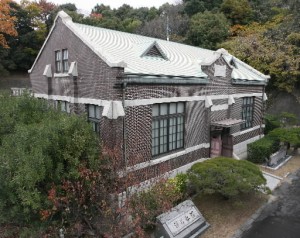 It was learned on December 21 that Japan’s Ministry of Health, Labour and Welfare will include the Museum of Waterworks in Hiroshima and Shiroyama National School (now Shiroyama Elementary School) in Nagasaki in its program to preserve buildings that survived the atomic bombings. Through this program, to be launched in fiscal 2016, both cities will receive 20 million yen for the preservation of these buildings. The funds will be included in the budget bill for fiscal 2016, which will be approved in a Cabinet meeting on December 24.

The Museum of Waterworks was built as a two-story pump house in 1924. Located about 2.8 kilometers from the hypocenter, the building suffered damage to its roof and window frames as a result of the bomb’s blast. It was made into a museum in 1985, and a report on its operations on the day of the Hiroshima bombing is on display. Through this report and other materials, it can be learned how city officials, while suffering from injuries themselves, managed to keep the water supply flowing to people in the stricken city.

Shiroyama National School was located about 500 meters from the hypocenter of the Nagasaki bombing. Many teachers and students who were at the school at the time of the bombing were killed. It has been turned into an exhibition facility, and many students on school trips go there to learn about the atomic bombing.

The ministry is seeking to support the preservation of buildings that survived the atomic bombings so that future generations can learn about the horrors of the tragic events. For the preservation of such structures, as designated by the cities of Hiroshima and Nagasaki, two-thirds of the costs will be covered, with an upper limit of 20 million yen.