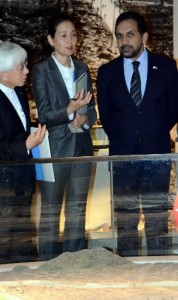 Ahmad Zia Massoud, the special envoy to the president for reform and good governance, paid his first visit to the Hiroshima Peace Memorial Park on December 18. Afghanistan has suffered from long-running conflict and instability. In the Peace Memorial Museum, Mr. Massoud touched the devastation wrought by the atomic bombing, and said that the world should learn a lesson from Hiroshima and place more value on human life.

Mr. Massoud is the younger brother of the late Commander Ahmad Shah Massoud, a renowned Afghan hero who fought against the former Soviet Union and the Taliban regime. Mr. Massoud joined his brother in these battles. Guided by Kenji Shiga, the director of the Peace Memorial Museum, Mr. Massoud studied a panoramic model of the charred city center and the personal possessions of A-bomb victims. He told reporters that political goals must never be achieved through destruction and bloodshed.

After the museum tour, Mr. Massoud offered flowers at the Cenotaph for the A-bomb Victims and visited the A-Bomb Dome. He also listened to the account of an A-bomb survivor at the International Conference Center Hiroshima.

Mr. Massoud arrived in Japan on December 13 at the invitation of Japan’s Ministry of Foreign Affairs and came to Hiroshima on December 17. He will visit Kyoto and then return to Afghanistan on December 19.