Hiroshima of South Korea, 70 Years After the Atomic Bombing: Part 2 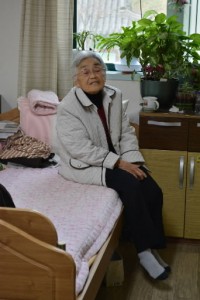 The Hapcheon A-bomb Sufferers Welfare Center of Hapcheon County, located in South Gyeonsang Province, South Korea, is the only nursing home for atomic bomb survivors in the country. In a shared room with gentle sunlight from the windows, Lee Suyong, 87, wiped away tears as she spoke about her past in fluent Japanese. She was exposed to the radiation of the Hiroshima A-bomb. After returning to her homeland, she found it difficult to integrate into South Korean life, which brought hardships to her children. It remains painful for her to talk about the past.

Ms. Lee moved to Hiroshima with her family in 1935 from a town on the outskirts of Hapcheon County. She landed a job at the branch office of the Hiroshima Postal Savings Bureau (in Senda-machi, now part of Naka Ward), located approximately 1.6 kilometers from the hypocenter. Although she was told that the Postal Savings Bureau would not hire Korean nationals, she bravely took and passed the test to become an employee. On August 6, 1945, she was proudly working there, as usual, when the atomic bomb was dropped on Hiroshima. She fled, covered in blood, from the burning city center. She was unable to help her colleagues.

When Ms. Lee returned to South Korea in November 1945, she struggled to communicate in Korean and faced great difficulties. Later, Hapcheon County became a battlefield in the Korean War and her relatives were killed by North Korean supporters. As a result of her isolation and poor health, she ended up getting married later than most other women of her generation. And before long, she found that her husband was unable to earn a living for their family. To make ends meet, she ran a fruit shop while raising three sons and a daughter. She was over 80 years old when she was accepted into the A-bomb Sufferers Welfare Center, where she could finally settle into a quiet life.

“I don’t want to tell my children or grandchildren about my experience of the atomic bombing,” said Yun Sugi, 85, as he spoke about the prejudice suffered by Korean A-bomb survivors. Mr. Yun was also exposed to the radiation from the Hiroshima A-bomb. In 2003, when the Japanese government began providing a health management allowance to A-bomb survivors living overseas, he considered applying for the Atomic Bomb Survivor’s Certificate. However, his second son’s wife stepped in and said that she would give him the same amount of money as the health management allowance. His daughter-in-law was apparently worried that her children might become the object of discrimination.

Still, this past fall, both Ms. Lee and Mr. Yun agreed to take part in a project organized by the welfare center to create videotaped testimonies of survivors’ A-bomb experiences. In their videos they shared their accounts of the atomic bombing and stressed that war and the use of nuclear weapons must never be permitted again. Kim Gwanghye, 58, the manager of the welfare and medical treatment section, believes that Ms. Lee and Mr. Yun, though they cannot tell their own family about the discrimination and hardships they suffered after their exposure to the A-bomb radiation, would still like to leave behind a record of the terrible experiences they endured in Japan and South Korea to younger generations who are unfamiliar with the horror of war.

The videotaped testimonies will play in the atomic bomb museum that Hapcheon County is planning to build next to the A-bomb Sufferers Welfare Center. The videos will relate the experiences of the A-bomb survivors, including the poverty that caused them to move to Japan, the discrimination they suffered after their return to South Korea, and the hardships they faced as a consequence of the war. The Hapcheon Branch of the South Korean Atomic Bomb Sufferers Association, which has long sought to construct this museum, hopes that the videotaped testimonies will serve as the central exhibit and convey the thoughts and feelings of the Korean A-bomb survivors by recounting the lives of individuals.

Kim Iljo, 87, has preserved some precious photos that he keeps in his room at the welfare center. These photos were taken before the atomic bombing and were brought back to South Korea after the war ended. They include a graduation photo from Eba Elementary School (now Eba Elementary School in Naka Ward) and a photo which shows him babysitting his sister when he didn’t continue his education after that. He would like to contribute copies of these photos to the new atomic bomb museum in South Korea. According to Mr. Kim, he faced discrimination in Japan, and after returning to South Korea, he went through tough times because his Korean was poor and he lacked knowledge of Korean customs. It was very hard for him to convey his past to his children, but these photos are evidence of the life he led. He hopes they will convey to visitors to the museum, on his behalf, the appeal that “there must never be another war.”

The welfare center currently accommodates 102 residents, whose average age is over 81.

Hapcheon A-bomb Sufferers Welfare Center
The Hapcheon A-bomb Sufferers Welfare Center was built with subsidies from the South Korean government and some 300 million yen of the 4 billion fund for humanitarian assistance for A-bomb survivors living in South Korea that the Japanese government contributed in the 1990s. The center opened in 1996, and is operated by the Republic of Korea National Red Cross. It has three floors above ground and a basement, and contains a clinic and residents’ rooms. It was expanded in 2009 and has a capacity of 110.