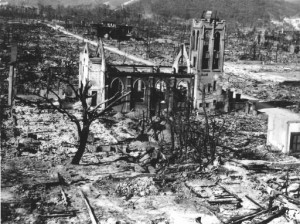 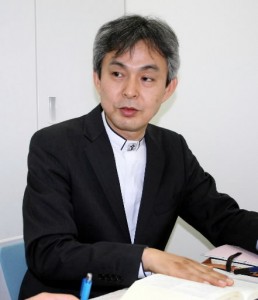 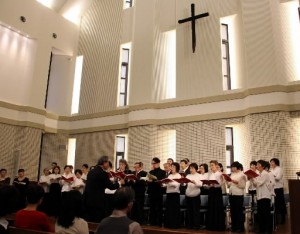 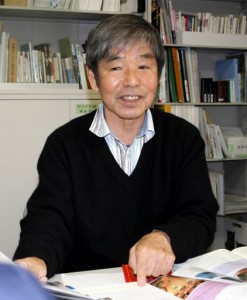 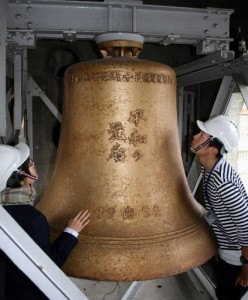 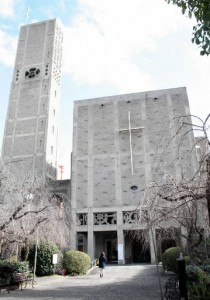 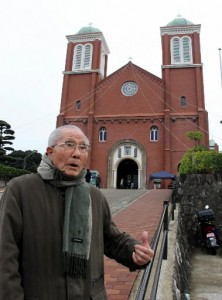 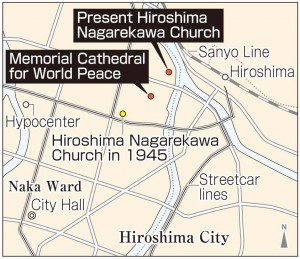 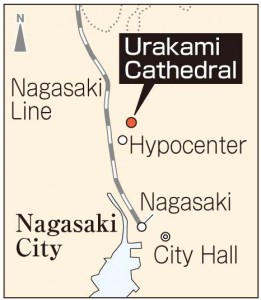 Part 24: Prayers offered on Christmas at churches in Hiroshima, Nagasaki
December 25 is Christmas, the day Christians celebrate the birth of Jesus. Many people in Japan also enjoy this day, putting up colorful Christmas decorations, holding parties, and exchanging gifts. To prepare this article, junior writers visited churches in Hiroshima and Nagasaki before Christmas.

During these visits, we saw a cross and a bell that conjure up memories of the atomic bombings and a cathedral that was built with goodwill donations from people around the world. We also listened to a song that has been sung at Christmas every year and served to inspire the minds of survivors through the reconstruction of the city that was devastated by the atomic bomb. We also learned that Christmas is a time for people to consider the preciousness of peace and wish that it be manifested on earth.

Caring for one another and sharing our joy is the spirit of Christmas. This is similar to the A-bomb survivors’ wish for peace. There are still conflicts in different parts of the world, and people are being badly affected, including children. We sincerely hope that the day will soon come when people of different religions, nationalities, and races can live together in peace with smiles on their faces. The year 2015 has marked the 70th anniversaries of the atomic bombings and the end of World War II. Take this opportunity of Christmas to think about peace with us.


Hiroshima Nagarekawa Church: The Messiah continues to be sung
A wooden cross is found in the chapel of the Hiroshima Nagarekawa Church. The cross, which is two meters high and 1.2 meters wide, was charred by the atomic bomb. On December 13, a service was held in front of the cross, and people sang the Messiah with the hope that peace can be realized.

The charred cross is a symbol of a church that continues to convey the experiences of the atomic bombing. Mareo Mukai, a priest at the church, said that the cross “gives us the strength to work for the creation of a peaceful world.”

The Messiah was first sung at Christmas in 1947, two years after the atomic bombing, using a score sent from the United States to support the revival of the city. This piece has been sung at the church at Christmas ever since. Mr. Mukai said in his sermon, “We who celebrate Christmas in Hiroshima should strive not to bring peace through the power of nuclear weapons but to realize genuine peace where the humblest lives are valued.”

At the time of the bombing, the church was located in the Kami-nagarekawa area (now part of Naka Ward), about 900 meters from the hypocenter. Only the outer walls of the building still stood after the atomic bombing. The church was then relocated and rebuilt, and the current building is the fifth-generation church.

Seventy years ago, Kiyoshi Tanimoto (1909-1986), a priest at the church, devoted himself to aiding the survivors though he, too, had been exposed to the bomb’s radiation. He was also instrumental in restoring the church building. Reverend Tanimoto toured the United States to relate the devastation brought about by the bombing, appealing “No more Hiroshimas.” It is said that his efforts touched the hearts of American citizens. He also worked hard so that children orphaned by the atomic bombing received support and women injured in the attack could access medical treatment in the United States. His strong will for taking action is impressive.

There are many Christians in the United States, which dropped the atomic bombs. We heard that a military chaplain offered a prayer for the pilots of the Enola Gay, the American B-29 bomber that dropped the atomic bomb on Hiroshima, to support the success of their mission. This means that the prayer was made in hopes of bringing death to the enemy. It’s frightening, we think, when a person is unable to imagine how there are other human beings also living in the enemy nation.

During the war, the church became a target of persecution because Christianity was the religion of the enemy. But on the other hand, for the church’s own survival, it cooperated in the war effort by holding rallies to pray for Japan’s victory. We must reflect on history when considering the freedom we have today.

Mr. Mukai said, “Flexing our muscles and inciting hatred could lead to war. If we build heart-to-heart relationships and become more considerate of each other, peace can be realized.” Living in a world that is constantly menaced by conflict and terrorism, we must take his words to heart. (Kyoka Yamada, 17, Aoi Nakagawa, 14, and Felix Walsh, 13)


Memorial Cathedral for World Peace: Smiles go beyond faith
The Memorial Cathedral for World Peace is the hub of the Diocese of Hiroshima, and also serves as the chapel of the Noboricho Church. Many events are held at the church in the days leading up to Christmas. On December 6, a Christmas concert took place and people enjoyed the mellow sounds of a pipe organ and strings.

The cathedral was built in 1945 to mourn for and remember the victims of the atomic bombing. Father Hugo Lassalle (1898-1990) was at Noboricho Church at the time of the bombing on August 6, 1945. Responding to his call for support in the aftermath, a bell, a pipe organ, stained glass, and other contributions were made from around the world. Father Lassalle went on to acquire Japanese nationality and adopted the name Makibi Enomiya.

Father Takashi Koezuka, 74, of the Diocese of Hiroshima, said, “While the A-Bomb Dome is a negative legacy that illustrates human evil, the cathedral is a building that conveys our prayers and resolutions to realize lasting peace.” Looking at the bell on which the word “peace” is inscribed, we realized the important role that the cathedral plays.

Mr. Koezuka said that Christmas has become something “beyond faith.” He means that while Christmas is a very important day for Christians to celebrate the birth of Jesus and offer solemn prayers, it has become a day that people across religious boundaries can enjoy as well.

This trend isn’t bad, he said, because the fact that people enjoy the day with warm feelings and smiles is a sign of peace. The idea comes from the teaching that we should always lend support to those who are vulnerable or troubled.

Showing affection for the baby Jesus is related to kindness and avoiding discrimination or bullying others. Saint Nicholas, who is said to be the model for Santa Claus, gave away his possessions to other people. This is a peace-building act. We will spend this Christmas thinking about these ideas. (Takeshi Iwata, 17, and Shiho Fujii, 14)


Urakami Cathedral: Bell rings for joy and peace
The city of Nagasaki is home to many Christians. Urakami Cathedral is located about 500 meters northeast of the hypocenter of the atomic bombing of this city. The bell is rung three times a day, a call for prayer.

During the war, however, the bells of the church did not ring because there was a mood that they should not be rung. The cathedral was destroyed by the atomic bomb on August 9, 1945, and its two bells were buried in the ruins.

One of the bells was destroyed but the other was found almost intact. Followers of the church assembled a wooden perch to hang the bell, and it was rung again on November 23, 1945 at a memorial service for the victims of the atomic bombing. It was also rung at Mass held on Christmas Eve that same year. The sound of the bell echoing over the stretch of burnt ruins encouraged the recovery efforts being made in the city.

Shigemi Fukahori, 84, remembers hearing the sound of the bell. “I was happy beyond words. It felt like the voice of God,” Mr. Fukahori said. He was glad that the bell was restored before Christmas and that he could finally pray to God without interruption.

Mr. Fukahori said that war must not be waged and he hopes that this era of peace will continue. We all share his hope. On Christmas Eve, Mass at Urakami Cathedral conveys this blessing through the sound of the bell. (Takeshi Iwata, 17)

I covered the service at Hiroshima Nagarekawa Church and took photos. The choir sung the Messiah and other hymns and I was impressed by their powerful singing. I go to a Christian high school, but I found that they make offerings of money during the service, which we don’t do in the service at our school. The service there was a new experience for me. Through this reporting, I learned the original meaning of Christmas and the importance of continuing to pray. (Aoi Nakagawa)

I visited Hiroshima Nagarekawa Church to write a story about churches in the A-bombed cities, peace, and Christmas. I heard directly how the church was destroyed by the blast and how it was reconstructed. To be honest, my impression was, “How could this church continue to exist after suffering such great damage!” By reporting on this, I learned that it’s very important to hope that people around me and all around the world live in peace. This is the most important thing, and it doesn’t have to be only at Christmas. It was a great experience for me. (Felix Walsh)

When I visited the church that was destroyed by the atomic bomb, I recalled the last scene of a short film titled “Orizuru” (“Paper Crane”), in which Sadako Sasaki’s paper crane was among the decorations on the Christmas tree of an American family. Sadako died of leukemia at the age of 12 as a result of the A-bomb’s radiation. I told Father Takashi Koezuka of the Diocese of Hiroshima about the film, and he said, “It’s a very significant scene. It shows that people wish for peace no matter which country they live in.” I hope the day will come when all the people in the world can enjoy this season the way they wish. (Shiho Fujii)

I visited Urakami Cathedral in Nagasaki. I was struck by how the collapsed bell tower has been preserved as it was after the bombing, which enables people to understand the damage that the A-bomb produced. I also visited the Nagasaki Atomic Bomb Museum and the one-legged tori gate, where one support column was knocked down. The destructive power of the bomb made a deep impression on me. I came to understand that it’s essential to preserve the remnants and materials that can convey the real destruction in order to show the horror of the war to future generations. (Takeshi Iwata)

What is Peace Seeds?
Peace Seeds are the seeds of smiles which can be spread around the world by thinking about peace and the preciousness of life from various viewpoints. To fill this world with flowering smiles, 45 junior writers, from the sixth grade of elementary school to the second year of high school, choose themes, gather information, and write articles.