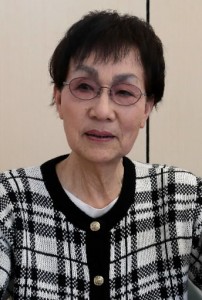 On April 10 and 11, the meeting of foreign ministers will take place in Hiroshima prior to the Group of Seven (G7) summit (Ise Shima summit). Foreign policy chiefs will gather in Hiroshima, the A-bombed city, from seven nations that include the United States, the nuclear superpower which dropped the atomic bomb on Hiroshima, and nuclear powers the United Kingdom and France, along with the European Union (EU), to discuss nuclear disarmament. What hopes are there for the meeting to advance the cause of a peaceful world free of nuclear weapons? The Chugoku Shimbun interviewed A-bomb survivors and young people in Hiroshima for their thoughts.

What will happen to the human beings under the mushroom cloud if a nuclear weapon is used? I hope the foreign ministers will have the opportunity to reflect on this question and understand the real damage caused by the atomic bombing in Hiroshima, rather than simply visiting the Peace Memorial Park and offering flowers at a monument as a matter of form. At the Peace Memorial Museum, I would like the foreign ministers to linger on the personal effects of the young A-bomb victims, like the charred lunch box and tattered school uniforms, try to feel the lives and the souls of those boys and girls who were killed by the A-bombing, and imagine how they would feel if the ones who perished had been members of their own family. By doing so, I believe they will come to grasp that the only way forward is action that will advance the elimination of nuclear weapons and war.

Sensing their genuine interest in Hiroshima

I experienced the atomic bombing in the yard of our house in the Onaga district (now part of Higashi Ward) when I was eight. My sister, a first-year student at First Hiroshima Prefectural Girls’ High School (now Minami High School) at the time, was mobilized to help tear down homes to create a fire lane and was killed in the bombing. Prior to the Hokkaido Toyako Summit (G8) in 2008, I sent a letter written in English to the leaders of the participating nations, asking them to visit Hiroshima.

I sent these letters because I felt a sense of crisis over the Iraq War, and I received replies from four nations, including the United States. Though all of them declined my request to visit Hiroshima, citing scheduling conflicts, I thought they expressed genuine interest in Hiroshima.

In April 2009, U.S. President Barack Obama appealed for “a world without nuclear weapons” in a speech he made in Prague. At that point, I felt as if this was a light at the end of the long tunnel. Presdient Obama, though, hasn’t fulfilled my hopes by visiting Hiroshima, and his time as president will end in less than a year. Last December, I traveled to Norway after being invited to attend the award ceremony for the Nobel Peace Prize and I shared my A-bomb account there. I came away thinking that the devastation wrought by the atomic bombing isn’t fully known by the international community.

Japan should acknowledge its responsibility for the war

Last December, both the City of Hiroshima and the City of Nagasaki requested that the leaders of the nations taking part in the Ise Shima summit visit the A-bombed cities of Hiroshima and Nagasaki in conjunction with that meeting. But in that same month, when Japan submitted a resolution at the United Nations General Assembly to promote a visit to the A-bombed cities by these leaders, nations including the United States, the United Kingdom, and France abstained from voting, while other nations like China, Russia, and North Korea voted against the resolution. Even the pure voices of the A-bomb survivors can hardly be heard amid the diplomatic posturing of the international community.

When I’ve shared my A-bomb experience with people in the United States, I sometimes encounter people who justify the atomic bombings by pointing to Japan’s attack on Pearl Harbor. Personally, President Obama may want to visit Hiroshima, but as president, he faces difficult domestic conditions and considerations. I hope that U.S. Secretary of State John Kerry, who will take part in the meeting of foreign ministers in Hiroshima, will help realize a visit by President Obama to Hiroshima by telling him how significant this would be.

There were others killed by the atomic bomb, too, not only Japanese nationals, among them forced laborers from the Korean Peninsula and China, American prisoners of war, and international students from Southeast Asia. I believe the Japanese government should work together with other nations to create a legal ban on not only nuclear weapons but on war as well. This should be done after acknowledging the responsibility it holds for World War II, including the background behind it, like Japan’s colonial occupation of other Asian nations.

Seventy-one years have now passed since the atomic bombing, and the A-bomb survivors are clearly fading in physical strength. I hope the meeting of foreign ministers can generate a productive outcome which will help usher in a new era for handing down our memories to the next generation and eliminating nuclear weapons from the Earth.

Emiko Okada
Born in 1937. A-bomb survivor and resident of Higashi Ward, Hiroshima. Ms. Okada served as a Peace Volunteer at the Hiroshima Peace Memorial Park for many years. She has long been active in sharing her A-bomb experience overseas, including at A-bomb exhibitions in the United States. In December 2015, she was invited to take part in the award ceremony for the Nobel Peace Prize. She also serves as a lecturer for the “Memory Keepers” program, an effort by the City of Hiroshima to help convey the memories of A-bomb survivors and their wish for a peaceful world to younger generations.