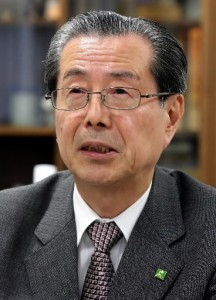 The seven nations that will take part in the Group of Seven (G7) summit (Ise Shima summit) include nuclear powers the United States, the United Kingdom, and France, along with major countries that rely on the U.S. nuclear umbrella. At the meeting of foreign ministers which will take place in the A-bombed city, I hope the foreign ministers will discuss, concretely, what their nations can do to reduce their dependence on nuclear weapons while maintaining security.

If these countries continue to rely on nuclear weapons, this poses the danger of further proliferation of nuclear arms to other nations, including North Korea. There is also the risk of terrorist attacks or accidents involving nuclear weapons. I hope Japan will take a leadership role and, together with the other nations which lie beneath the U.S. nuclear umbrella, persuade the United States to move toward establishing a new security policy.

In the medium- and long-term future, it is essential to forge a security framework by strengthening mutual understanding and respect for diversity. Mayors for Peace, the global network chaired by Hiroshima Mayor Kazumi Matsui, for which the Hiroshima Peace Culture Foundation serves as secretariat, has also sought to apply stronger pressure on the United States and other nations.

Visit to Hiroshima could influence options

Mayors for Peace sent a formal letter to each nation, requesting that they participate in a U.N. working group designed to discuss measures to advance nuclear disarmament, including potential legal provisions. However, when the group’s first meeting took place in February, the nuclear powers, including the United States, the United Kingdom, and France, did not attend.

As concluding a nuclear weapons convention would be a major turning point toward a world free of nuclear arms, it is disappointing that these nations chose not to join the meeting to discuss the shape of such an agreement. Over the past several years, the non-nuclear nations have taken the lead in discussions on nuclear disarmament by focusing on the inhumanity of nuclear weapons, and this has had some impact. Thus, the nuclear nations are concerned that their arguments at the U.N. working group could be overturned by a majority vote.

Politicians who play pivotal roles in the governments of nuclear nations, such as U.S. Secretary of State John Kerry, will be visiting Hiroshima for the meeting of foreign ministers. When they tour the Peace Memorial Museum, I expect that will be strongly affected, as human beings, by the horrific damage wrought by a nuclear weapon and this experience could influence the options they pursue in terms of nuclear policy. My hope is that some kind of link can be created between these nations and the U.N. working group, which will hold its next meetings in May and August.

Improving bilateral relations between the United States and Russia, the other nuclear superpower, is another key factor in effecting progress toward nuclear disarmament. At the initial meeting of the U.N. working group, I spoke as the secretary-general of Mayors for Peace and urged our political leaders to now exercise decisive leadership.

Nuclear disarmament efforts, which had been pursued by the United States and Russia in the past, were realized by reaching compromises between their leaders amid rising tensions. Hiroshima could hold great significance for U.S. President Barack Obama, who has appealed for a world free of nuclear weapons, as the site for delivering a constructive message on nuclear abolition. I do hope President Obama will decide to visit Hiroshima. Such a visit would only be natural.

Yasuyoshi Komizo
Born in 1948 in Chiba Prefecture, Mr. Komizo graduated from the faculty of law at Hosei University. He joined the Ministry of Foreign Affairs in 1970 and served as special assistant to the chief of International Atomic Energy Agency (IAEA) and Ambassador, Permanent Mission of Japan to the International Organizations in Vienna. After serving as Ambassador to Kuwait, he retired from the Ministry of Foreign Affairs in November 2012. He assumed his current post in April 2013, and also serves as the secretary-general of Mayors for Peace.