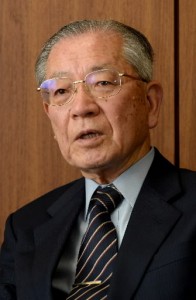 Hiroshi Harada: Foreign ministers should look closely at the consequences of the atomic bombing

As the meeting of foreign ministers approaches, my concerns have grown because I wonder to what degree our sentiments can be clearly understood during their short visit to Hiroshima and I worry that the meeting could simply end up affirming current nuclear policy. I think the foreign ministers have a responsibility to fully recognize the real consequences of the atomic bombing, respond to the deep desire of A-bomb survivors that this tragedy never be repeated, and reflect this in the political arena. Their visit to Hiroshima should not become merely a formal ceremony.

I experienced the atomic bombing at Hiroshima Station (part of today’s Minami Ward), about two kilometers from the hypocenter, when I was six years old. From 1993 to 1997, I was the director of the Hiroshima Peace Memorial Museum, located in Naka Ward, and I explained the damage of the atomic bombing to many important visitors from Japan and overseas.

It is essential that people understand the horrific, inhumane conditions in the A-bombed area within two kilometers of the hypocenter, where most of the buildings were completely destroyed and burned. Many in that area were suddenly charred by the blast. Those who managed to survive had to stumble past the victims on the ground, not knowing if they were dead or alive, in order to flee. The foreign ministers should listen carefully to the stories that only A-bomb survivors, who were there at the time, can tell.

The Cenotaph for the A-bomb Victims isn’t the only site that the foreign ministers should visit in the Peace Memorial Park. In my opinion, the Atomic Bomb Memorial Mound, which holds the remains of some 70,000 victims, and the area now being excavated on the grounds of the Peace Memorial Museum’s main building should be seen as well. The remains of old streets, which have been unearthed through the excavation work, are evidence of the fact that the daily lives of the people were lost. Still, the City of Hiroshima has concealed the site from view by enclosing the area in fencing and plastic sheets. I wonder if the city government can propose to the Foreign Ministry that such locations are must-see spots to communicate the reality of the atomic bombing.

In 1995, when I was serving as the director of the Hiroshima Peace Memorial Museum, the Smithsonian National Air and Space Museum, in the United States, planned to hold an exhibition featuring materials related to the atomic bombings. The exhibition, though, was fiercely opposed by World War II veterans because of their deeply-held belief that the bombings were justified.

The United States should take in the reality of the atomic bombings and the appeal from the A-bomb survivors, and recognize that the A-bomb attacks should not have been permitted for any reason. As long as the United States continues to justify the atomic bombings by saying that they were necessary to save its own soldiers or end the war more quickly, it may continue to hold onto its nuclear arms, on into the future, and use such weapons again with similar excuses.

At the same time, even after the International Court of Justice (ICJ) delivered its advisory opinion in 1996, ruling that the threat or use of nuclear weapons was generally illegal, Japan has continued to cling to the U.S. nuclear umbrella for its security, without adequately pressing the United States with regard to its responsibilities and the illegality of the atomic bombings. I believe it is time that Foreign Minister Fumio Kishida, who will visit the Peace Memorial Park with U.S. Secretary of State John Kerry, a key figure in the U.S. administration, clearly declared that the use or possession of nuclear arms is not acceptable for any reason, and that all such weapons must be eliminated.

I plan to keep an eye on whether the foreign ministers truly act to advance nuclear disarmament after they return home. As the next step, I would also like to see them pay another visit to Hiroshima on August 6.

Hiroshi Harada
Born in 1939. After graduating from Waseda University, Mr. Harada became a Hiroshima City official in 1963. While serving as the director of the Hiroshima Peace Memorial Museum, he was involved in activities to commemorate the 50th anniversary of the atomic bombing as well as preparations for the statement by then Hiroshima Mayor Takashi Hiraoka for the hearing on the use of nuclear weapons at the International Court of Justice (ICJ.) He also served in such capacities as board chairman of the Hiroshima City Culture Foundation. He has long been active in sharing his A-bomb account with others.