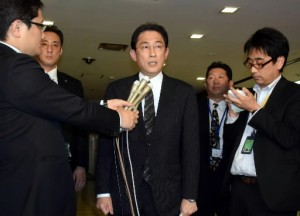 Aims of Japan and the United States are aligned
by Michiko Tanaka, Staff Writer

“This renewed determined on the part of the U.S. president, in advocating a world without nuclear weapons from the A-bombed city, is particularly significant for our children, grandchildren, and future generations.” (Japanese Prime Minister Shinzo Abe)

“The president intends to send a much more forward-looking signal about his ambition for realizing the goal of a planet without nuclear weapons.” (White House Press Secretary Josh Earnest)

On May 10, both the Japanese and U.S. governments announced that President Obama will visit the city of Hiroshima. From interviews made with reporters in Japan and the United States, the two governments apparently communicated closely before making their announcement. The word they emphasize is “future-oriented.”

Preparations for the president’s visit to Hiroshima have steadily moved forward. On the sidelines of the foreign ministers’ meeting, held in Hiroshima prior to the upcoming Group of Seven (G7) summit (Ise Shima summit), U.S. Secretary of State John Kerry visited the Peace Memorial Park in Naka Ward on April 11. Speaking to the press afterward, he shared his frank impressions of the museum, saying that it was a “gut-wrenching display.”

At the same time, he also stressed: “The reason we came here was not to be stuck in the past. We came here and drew from the experience of touring this museum how critical it is that we all apply the lessons of the past to the future and the present.” In the United States, the notion that the atomic bombings of Hiroshima and Nagasaki 71 years ago were justified still prevails widely. The secretary of state’s remarks were directed toward the American people, who might misconstrue the president’s visit to Hiroshima as “apologetic diplomacy.”

Japan, too, is seeking to promote a suitable environment for Mr. Obama’s visit to the A-bombed city. On May 10, Mr. Abe avoided a direct response to a reporter’s question about asking the president for an apology, instead repeatedly insisting that the significance of the visit should involve paying respect to the A-bomb dead and sending the message of creating a world without nuclear weapons.

Some people take a cynical view of the Japanese and U.S. governments. “I suspect President Obama is just trying to burnish his legacy,” said Jacqueline Cabasso, an American peace activist from California. She pointed out that the Obama administration has proposed an estimation of about one trillion dollars over the next 30 years for upgrading the U.S. nuclear arsenal and related systems. Even if Mr. Obama repeats statements that ring nicely, she said, they will still contradict his administration’s policies.

Later on May 10, Japanese Foreign Minister Fumio Kishida mentioned the role of the nation that suffered the devastating consequences brought about by the atomic bombs. He said that, through President Obama’s visit to Hiroshima, the two governments would like to create new cooperation for advancing the ideal of a world without nuclear weapons.

However, the steps that both governments are willing to take are based only the “realistic” and “practical” approach to nuclear disarmament that the United States and the other nuclear powers adhere to.

“The president’s decision to visit Hiroshima with Prime Minister Abe is a tribute to the spirit of friendship and the enduring alliance between the United States and Japan,” said Caroline Kennedy, the U.S. ambassador to Japan, on May 10. Her statement conveys the additional significance of Mr. Obama’s visit.

Since the launch of his second administration in 2012, Mr. Abe has continued to push for the establishment of a stronger Japan-U.S. relationship and he would like to ensure deeper ties between the two nations. Meanwhile, President Obama is said to have his own legacy in mind in this decision to appeal for a world without nuclear weapons from the A-bombed city. The alignment of these aims by both leaders has led to the first-ever visit to Hiroshima by a sitting American president.