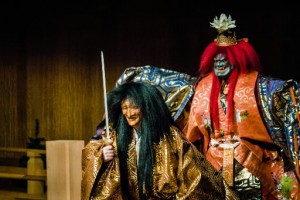 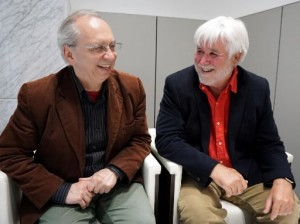 Allan Marett, 66, a professor emeritus at the University of Sydney in Australia, and Richard Emmert, 66, a professor at Musashino University in Tokyo, have created a new Noh play in English called Oppenheimer. The play focuses on Robert Oppenheimer, the scientist who led the Manhattan Project and its development of the atomic bomb, and conveys the ideas of human sin and remorse. The play premiered in Sydney last fall and the two men are now hoping to arrange a performance in the A-bombed city of Hiroshima.

Hiroshima is the setting for the play, which is described in this way: “Oppenheimer, in the main role called Site, wanders as a ghost in this world. In his confession of his unavoidable suffering to a pilgrim, the role of the listener called Waki, he becomes enlightened and realizes that his actions in creating the atomic bomb have produced horrific consequences based on the law of cause and effect, and he vows to Fudo Myo-oh, the Buddhist King of Wisdom, that he will now shoulder this sin.”

Mr. Marett, a specialist in musicology, is familiar with Japanese court music and Noh and has been teaching such subjects to students in Sydney. Mr. Emmert has been a resident of Japan for more than 40 years, serving as the artistic director of a theater group called Theater Nohgaku, located in Tokyo. He is involved in Noh performance staged by non-Japanese while teaching Asian drama and Japanese music at Musashino University.

Mr. Marett and Mr. Emmert, who have been acquainted for many years, jointly created a Noh play in English some 30 years ago. For Oppenheimer, they say they cherish the concept of the play, with its theme of the Hiroshima bombing, a historic event in human history.

When Oppenheimer was performed in Sydney for two days, the hall was nearly full to its capacity of 300 seats for each performance. Mr. Marett described the audience’s reaction, saying that though he could not clearly see out into the hall, he heard many sobs.

The play, they said, encourages us to reflect on the consequences of our actions, rather than emphasizing blame. Through their work they want to convey the fact that human beings are responsible for creating a peaceful and meaningful world. They are now seeking supporters for a performance of the play in Hiroshima.