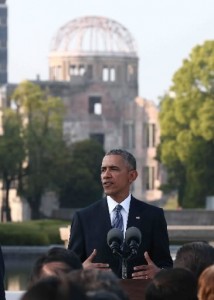 On May 27, U.S. President Barack Obama visited Hiroshima, the first sitting American president to come to this city, site of the horrific A-bomb attack 71 years ago. Mr. Obama offered flowers at the Cenotaph for the A-bomb Victims in the Peace Memorial Park, located in Naka Ward, and said in a speech before the cenotaph that “Among those nations like my own that hold nuclear stockpiles, we must have the courage to pursue a world without them.” A-bomb survivors, including Sunao Tsuboi, 91, the chairperson of both the Japan Confederation of A- and H-bomb Sufferers Organizations and the Hiroshima Prefectural Confederation of A-bomb Sufferers Organizations, sat in the audience and spoke briefly to the president afterward.

Mr. Obama arrived at the park just after 5:20 p.m. After seeing special exhibits in the museum, including paper cranes that were folded by Sadako Sasaki, a Japanese girl who died of A-bomb-induced leukemia 10 years after the bombing, the president proceeded outdoors to the cenotaph.

With about 100 people in attendance, seated on chairs on the lawn in front of the cenotaph, Mr. Obama offered a wreath of flowers at the monument and closed his eyes for several seconds as he made a silent prayer to the victims. Among those making up the audience, who were invited by the Japanese and U.S. governments, were Hiroshima Mayor Kazumi Matsui and Nagasaki Mayor Tomihisa Taue.

At the start of his speech, Mr. Obama described the atomic bombing by saying, “Seventy-one years ago, on a bright cloudless morning, death fell from the sky and the world was changed.” He mentioned the many victims, including Korean nationals, and said, “Someday the voices of the hibakusha will no longer be with us to bear witness. But the memory of the morning of August 6, 1945 must never fade.” He made no apology about the A-bomb attack.

Prime Minister Shinzo Abe, who accompanied the president, stressed in his speech and that he would continue to make efforts to help realize “a world without nuclear weapons.”

President Obama then approached Mr. Tsuboi and the two men shook hands. The president and Shigeaki Mori, an A-bomb survivor and resident of Nishi Ward, embraced. Mr. Mori is a local historian who has researched the presence of American prisoners of war who lost their lives in the atomic bombing.

After gazing at the A-bomb Dome from a point in front of the Children’s Peace Monument, the president left the park. In total, he was at the park for 52 minutes.

Mr. Obama assumed the presidency in January 2009. In the speech he made in Prague that April, he appealed for “a world without nuclear weapons.” He also showed interest in visiting Hiroshima. The president came to Japan for the Group of Seven (G7) summit (Ise Shima summit) that ended on May 27. After these discussions, he traveled on Air Force One to the U.S. Marine Corps Air Station Iwakuni, located in the city of Iwakuni, then transferred to a helicopter and landed at Hiroshima Heliport in Nishi Ward.

*Seventy-one years ago, the atomic bombing changed the world.
*We came to mourn the dead, including over 100,000 Japanese people, thousands of Koreans, and a dozen Americans held prisoner.
*Hiroshima teaches this truth. The memory must never fade.
*We have a shared responsibility to look directly into the eye of history.
*We must change our mindset about war itself to prevent conflicts through diplomacy.
*We must have the courage to pursue a world without nuclear weapons.
*No apology was made.