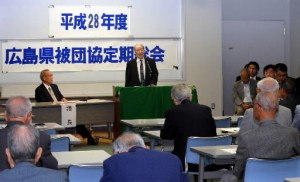 On May 27, 60 years ago, the Hiroshima Prefectural Confederation of A-bomb Sufferers Organizations (Hidankyo) was established to pursue relief measures for A-bombed survivors from the Japanese government and the abolition of atomic and hydrogen bombs. This year, May 27 also became the day that U.S. President Barack Obama visited Hiroshima. His visit to the A-bombed city gave further significance to this important day for Hiroshima’s A-bomb survivors.

On May 29, the organization held a general assembly and a memorial event to commemorate its 60th anniversary in Naka Ward, Hiroshima. Sunao Tsuboi, 91, the chairperson of Hidankyo, had been invited to observe President Obama’s speech in person in the Peace Memorial Park. Reflecting on that moment, he said with emotion, “I encouraged President Obama to work together with us to abolish nuclear weapons. We have to stick to this aim without abandoning hope. Never give up!”

When Mr. Obama spoke in Hiroshima, he used the word “hibakusha” (A-bomb survivors) two times in appealing for the memories of the bombings to be handed down to younger generations and for the world to pursue a forward-looking approach. The average age of the A-bomb survivors is now over 80 and, as a consequence, local survivor organizations in Hiroshima Prefecture are disbanding one after another. One participant at the general assembly expressed hope that the president’s visit to Hiroshima would offer new momentum for their efforts.

No response to letter

Still, it is not clear whether Mr. Obama will join forces with the A-bomb survivors in the future. A global signature drive is being pursued by the Japan Confederation of A- and H-Bomb Sufferers Organizations (Nihon Hidankyo), calling on the nations of the world to realize the abolition of nuclear arms while the survivors are still alive. This campaign is backed by the prefectural Hidankyo as a focus of its activities in this fiscal year. But when 54-year-old Barack Obama spoke in Hiroshima, he said, as he did when speaking in Prague seven years ago, that the goal of abolishing nuclear weapons might not be realized “in my lifetime.”

Mr. Obama has not responded to a letter sent by Nihon Hidankyo to the White House prior to his visit. The letter appealed for him to spearhead efforts to ban nuclear arms and take part in meetings of the United Nations working group which seeks to advance nuclear disarmament. At the general assembly, Toshiki Fujimori, 72, the assistant secretary general of Nihon Hidankyo, coldly noted that President Obama has been standoffish in his efforts to create a world free of nuclear weapons.

Without depending on the aid of Mr. Obama, who will be leaving the presidency in January of next year, how will the A-bomb survivors move forward in their quest to see nuclear weapons abolished, their long-awaited wish? Haruko Moritaki, 77, the daughter of the late Ichiro Moritaki, who seized the initiative in efforts to ban atomic and hydrogen bombs as the first chair of the prefectural Hidankyo, spoke at the memorial event and appealed to the audience by quoting from her father’s final writings: “The possibility of abolishing nuclear weapons lies utterly in the solidarity of citizens.” Ms. Moritai also serves as co-chair of the Hiroshima Alliance for Nuclear Weapons Abolition.

Meanwhile, the next-generation supporters of the A-bomb survivors in Hiroshima seem highly motivated. Kazuyoshi Yukawa, 69, head of the committee of second-generation survivors within the prefectural Hidankyo, took part in the general assembly and said that he would like the second-generation survivors to play a more proactive role in assisting the survivors and handing down their memories to the next generation. Airi Sakuhara, 17, a second-year student from Eishin High School, who observed the personal interaction between Mr. Tsuboi and Mr. Obama, expressed her hopes, saying, “I want to help with the signature drive seeking the abolition of nuclear weapons so that Mr. Tsuboi’s wish to realize this aim as early as possible will be taken to heart more seriously by President Obama.”

Yasuyoshi Komizo, the secretary-general of Mayors for Peace (chaired by Hiroshima Mayor Kazumi Matsui), said, “President Obama described his visit to Hiroshima as a first step. The future can only be influenced in a real way when a wave of new efforts are made by the people of Hiroshima to advance a world free of nuclear weapons.” Mr. Komizo is intent on making a strong appeal to the nuclear powers and the nations shielded by the U.S. nuclear umbrella to make changes in their security policies.

In the A-bombed city, Mr. Obama said, “Among those nations like my own that hold nuclear stockpiles, we must have the courage to escape the logic of fear, and pursue a world without them.” Will his visit, and the words he spoke here, have historic significance? In this respect, the efforts made by the people of Hiroshima beyond May 27 will be tested, too.