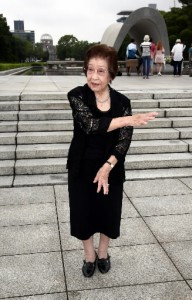 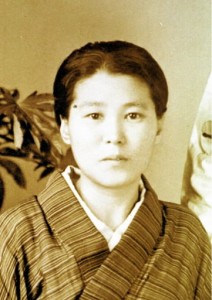 Part 1: The place where he gave his speech
by Kyosuke Mizukawa, Staff Writer

On May 27, the people of Hiroshima welcomed the first-ever visit by a sitting president of the United States, the nation that dropped the atomic bomb. On that day, U.S. President Barack Obama stepped foot on the ground of the Peace Memorial Park in Naka Ward, the same location that was devastated by the bomb on August 6, 1945. For the past 71 years the survivors of this nuclear attack have endured a long road of hardships. While Mr. Obama spent only 52 minutes in the park, these 52 minutes surely mattered. The Chugoku Shimbun will convey the reality of Hiroshima that the president mentioned in his speech, and focus on the inhumane effects of nuclear weapons that must be faced.

Loved ones, and the entire district, are lost to the bomb

In front of the Cenotaph for the A-bomb Victims in the Peace Memorial Park, President Obama addressed the world in his “Hiroshima Speech.” Standing on the same spot in the middle of July, Shizue Mukai, 87, an A-bomb survivor and resident of Nishi Ward, looked back nostalgically at her childhood. “There was a theater behind where the cenotaph now sits,” she said. “My kindergarten was also located near here. I used to play with my friends on the grounds of the temple close by.” In this place, too, she suffered a sad parting with her family. “Even now, I dream about the happy memories I had with my mother, who died here.”

The area in front of the cenotaph once bore the address 46 Zaimoku-cho. Ms. Mukai’s family lived there in a two-story wooden house. Her family had just moved in at one corner of the busy downtown street, a Hiroshima artery, at the end of July 1945.

Ms. Mukai’s family ran a shop called Heikan-do, which made and sold yokan, a kind of sweet bean jelly, in Kako-machi (now part of Naka Ward), located south of Zaimoku-cho. Her mother, Sadako Ohara, widowed early, managed the shop with relatives while raising her seven children. But the shop was forced to close soon after war broke out between Japan and the United States because supplies grew scarce. Because the shop then became marked for demolition to create a fire lane, her family rented the home in nearby Zaimoku-cho from an acquaintance.

Lost her mother who had supported the family

Early in the morning of August 6, 1945, Ms. Mukai, then a fourth-year student at Shintoku Girls’ High School, left for her uncle’s home in a Hiroshima suburb. Her mother had asked her to bring her uncle into the city for a family reunion. Another uncle, who was living in the same area as Ms. Mukai, had returned from Tokyo after being called up for military service. “I’m off!” she said to her mother, the last moment they shared.

Their house was located about 300 meters from the bomb’s hypocenter. When she returned to the city on August 9, she found the house had been completely destroyed, with aluminum containers for making yokan charred by fire. Ms. Mukai recalled, “I found my mother’s gold tooth and I picked up a white bone lying nearby, but it crumbled in my hand because it was burnt right through.” Her mother died at the age of 47. In addition, her sister, Yaeko Sasaki, 22 at the time, and Yuzo, Yaeko’s husband, who was 27, were killed, too. They were newlyweds and lived at the house. Mitsu Ohara, her great-aunt, also died. She was 75.

“I felt so sad and angry over losing these members of my family, including my mother, who had worked really hard to support us all.” After the war, Ms. Mukai got married and had a son and a daughter. She now has a great-grandchild. She said, “I don’t want my children and grandchildren to ever experience what I did. Just looking at the one place in Hiroshima where President Obama made his speech, so many families like mine were decimated there.”

Pain of survivors not fully understood

In his speech, President Obama referred to the daily lives of people in Hiroshima before the A-bomb attack, saying, “Those same precious moments took place here 71 years ago.” And he appealed for a “moral awakening” that will advance the abolition of nuclear weapons.

West of the main walkway in the park is a grass field that President Obama looked out on when he made his address. On this spot was the home of Ms. Mukai’s uncle, who had returned from Tokyo. No trace of his and his wife’s remains were found. Meanwhile, his landlord’s home was once located near the area where the chairs were placed for key figures from Japan and the United States who watched the president speak. The landlord and two members of his family perished in the bombing. It is said that the landlord ran a trading company after his return from Hawaii, to where he had immigrated in 1938. A post office and a clock shop, situated where the main walkway now lies, were lost as well.

Commenting on Mr. Obama, who closed his eyes in front of the cenotaph to mourn the victims, Ms. Mukai said, “In heaven, my mother may have found a little peace because of his visit, but I don’t think he has completely understood our pain.” Even if asked, Ms. Mukai will sometimes decline to talk about her A-bomb experience. For this article, however, she agreed to visit the site where her home once stood and offer her account. By sharing what happened in the very place where President Obama stood during his speech, she felt she could help others understand the horror of the atomic bombing, which devastated her family and the entire city center.