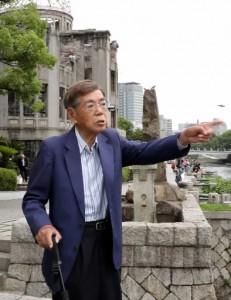 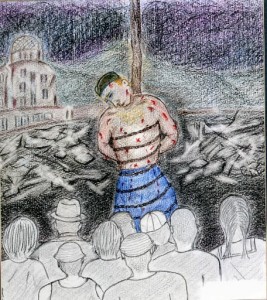 Hiroshima Peace Memorial Museum holds a drawing of an American prisoner of war, stripped to the waist and tied to a stake. His upper body is badly wounded, and rubble is strewn about him. The picture conveys what Goro Takeuchi, 93, saw by the Aioi Bridge in the city center within days after the atomic bombing of Hiroshima. Mr. Takeuchi, a resident of Asaminami Ward, was then a cadet in the Japanese Imperial Army. Recalling the rocks and pieces of rubble scattered around the American soldier, which were used to pelt him, Mr. Takeuchi acknowledged, “I was one of those who threw rocks at him.”

When the atomic bomb was dropped on Hiroshima, Mr. Takeuchi was supervising the training of a suicide boat crew on the water near Ujina Port (now part of Minami Ward). In the aftermath of the attack, he ventured into the city center and helped aid the injured and cremated the bodies of victims until August 13.

“The hardest thing I did was helping pregnant women who went into labor because of the impact of the bomb,” he said. The mothers themselves were seriously injured but battled to give birth to their babies. Most of the babies he delivered, though, were not breathing and their faces were ashen.

“How could I tell them that their babies were dead?” he thought. The dying mothers then asked him to take care of their babies. One mother, before expiring, said to him: “Mr. Soldier, take revenge for us.”

This is why he reflexively picked up a rock when he saw the American soldier.

Around the same time, Sumako Yamada, 91, saw two U.S. soldiers near the Aioi Bridge. She was on her way from her home in Itsukaichi (now part of Saeki Ward) to the city center, where she was making an ongoing search for relatives.

Both soldiers, she said, were bound with wire to crosses made from planks of wood. Their faces were pale, and one was bleeding from his head. “It was like they were imploring me to tell their parents back home that they were dead,” she recalled. “I couldn’t do anything for them and I felt a lump in my throat.”

Unable to forget the sad looks on their faces, after the war ended, she would always join her hands in prayer when crossing the bridge. Hoping to still convey some information to their families, she made a total of four pictures of the soldiers in 1975 and 2002 and donated them to the Hiroshima Peace Memorial Museum.

Shigeaki Mori, 79, a resident of Nishi Ward, is a local historian who has been investigating the fates of the American prisoners of war who were killed in the Hiroshima bombing. According to Mr. Mori, 12 POWs were held at the Chugoku Military Police Headquarters, which was located near what is now the prefectural government office, and around Hiroshima Castle. Because this facility was destroyed by the blast, some of the prisoners are believed to have been killed instantly, while others apparently manage to escape. Mr. Takeuchi and Ms. Yamada shared their stories of seeing American soldiers with Mr. Mori. There are other accounts of seeing American soldiers around the secondary enclosure of the castle.

On May 27, U.S. President Barack Obama offered a wreath of flowers at the Cenotaph for the A-bomb Victims in the Hiroshima Peace Memorial Park and delivered a speech in front of the cenotaph. In his speech, he included American prisoners of war when he spoke about remembering the dead. Then he approached Mr. Mori, who had been invited by the U.S. government to sit in the front row, and the two men embraced. Ms. Yamada watched the scene on a TV in her room at a health care facility for the elderly. She said, “The sorrow of the American soldiers was eased a bit, perhaps.”

When the war ended on August 15, 1945, Mr. Takeuchi was in Okinawa, awaiting orders for a mission as a suicide bomber. “In those days, I was consumed by hostility toward American soldiers,” he said. “But now I can say clearly that what I should be condemning is war and nuclear weapons.”