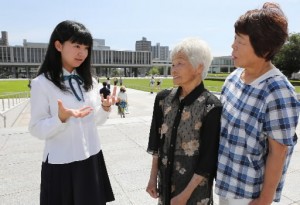 Momoka Namikawa, 17, a third-year student at Hiroshima Jogakuin High School and a resident of Saiki Ward, guided her relatives, including her great-grandmother Teruko Niwaki, 91, an A-bomb survivor and resident of Saiki Ward, to a special spot in the Hiroshima Peace Memorial Park in Naka Ward. In May, Ms. Namikawa was at this spot to hand U.S. President Barack Obama a flower wreath for him to lay at the Cenotaph for the A-bomb Victims. “He had a kind look on his face as he took the wreath from me, and he prayed sincerely for the victims,” she said.

In the spring of 2015, Ms. Namikawa went to New York for the Review Conference of the Nuclear Non-Proliferation Treaty (NPT). She was among a group of eight high school students who were dispatched to the conference by Mayors for Peace (for which Hiroshima Mayor Kazumi Matsui serves as president). This experience brought the invitation to take part in the ceremony connected to President Obama’s visit. Ms. Namikawa said, “Ever since his speech in Prague, when he said he would seek the peace and security of a world without nuclear weapons, I had been looking forward, with high hopes, to the day he came to Hiroshima.”

Ms. Namikawa was born and raised in Hiroshima. She became interested in issues involving the atomic bombing and peace when she was in her first year of junior high school. At that time she visited the Peace Memorial Museum in Naka Ward for the first time and noticed that one visitor had written in the museum guestbook: “I hate the United States.” She was shocked by the comment, believing that the museum was simply trying to convey the horror of nuclear weapons to visitors, and she began wondering about the true nature of peace.

Survivor passes away before interview

In her first year of high school, Ms. Namikawa joined a school activity to collect signatures on the street in support of nuclear abolition. She also spent time gathering accounts of A-bomb survivors to contribute to the website “Hiroshima Archive,” which describes the horrific consequences of the atomic bombing. In speaking to survivors, they related their A-bomb experience as if it had happened only the day before. During this time, she was saddened to learn that one survivor abruptly passed away one week before their interview date. Experiences of this kind drove home the fact that the people of her age may be the last generation able to listen to the survivors’ words directly.

Until she became involved in these activities, Ms. Namikawa wasn’t aware that her great-grandmother on her mother’s side is an A-bomb survivor, too.

On the day of the bombing, Teruko Niwaki was working at a factory of Toyo Kogyo (now the Mazda Motor Company), located in Fuchu. When the bomb exploded, she was pinned down by a falling locker. That evening she saw the city center, which was utterly destroyed. Her second son, who was born eight years after the end of the war, died of leukemia at the age of two. She blamed herself for his death, thinking that his disease could have been caused by her exposure to the atomic bomb. Because of these painful memories, she avoided talking about her experience with anyone but members of her family. Twenty-seven years after the bombing, she finally obtained the Atomic Bomb Survivor’s Certificate. Her first daughter’s marriage helped her make the decision to pursue it.

Each time Ms. Namikawa has listened to the A-bomb account of roughly 20 A-bomb survivors, including her great-grandmother, she has imagined being alive on that day. “To me, the atomic bombing is pure horror,” she said. “No one should ever have to suffer that sort of experience, or feelings, again.”

However, her simple, ordinary wish has not taken hold in the international community. The discussion at the NPT Review Conference last year, which she expected would enable progress toward nuclear disarmament, resulted in a breakdown without adopting a final document. When a public gathering for young people was held in Hiroshima this past March, organized by the Foreign Ministry to take place prior to the meeting of G7 foreign ministers, Ms. Namikawa took the podium and urged Fumio Kishida, the Minister of Foreign Affairs, to help enact a nuclear weapons convention as soon as possible. But the Japanese government is still reluctant to support this approach.

Ms. Namikawa said, “We may have a long way to go before nuclear weapons are abolished. But I don’t think our demands are a waste of breath because the visit by President Obama was finally realized as a result of our appeals.” As one of the participants in the ceremony held during President’s Obama’s time in the city, she is determined to continue conveying Hiroshima’s message.

Standing on the spot where her great-granddaughter encountered the U.S. president, Ms. Niwaki shared her wish, saying, “My great-granddaughter has listened to my account carefully, and taken it to heart. I hope she will be able to live in a world that’s free of nuclear weapons.”