Interview with professor Robert Jacobs: Must say no to a war more 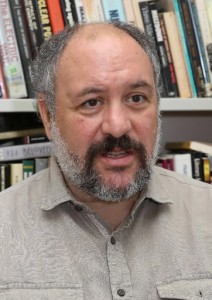 People in Hiroshima, which marked the 71st anniversary of the atomic bombing, have still evaluated the visit by U.S. President Barack Obama highly. Meanwhile, there is still a long way to go to realize the abolition of nuclear weapons in international society. The Chugoku Shimbun interviewed Robert Jacobs, 56, a professor at the Hiroshima Peace Institute of Hiroshima City University, about how we can fill the gap between real politics and the desire of people in the A-bombed cities. Mr. Jacobs has been living in Hiroshima for 11 years, and is familiar with American public opinion and pop culture concerning nuclear issues.

I have heard your own experiences as a child is the point of origin that has driven you to continue your research activity in the A-bombed Hiroshima.
When I was an elementary school student in Chicago, U.S., I went through a training similar to “Duck and Cover” every month. In the training, I practiced what to do when a nuclear weapon exploded. After my teacher told the students that a tremendous flash happened, we ducked on the floor all at once. I was scared, because I thought I was going to die soon. From 1950s to 1960s, conducting such a training was quite popular at schools in the U.S. As I couldn’t stop thinking about horrors of nuclear war, I read a lot of books on nuclear weapons. Then, I took part in the antinuclear movement in my teens, and I developed a strong belief that nuclear weapons must be eliminated. So, I think it was inevitable for me to come to Hiroshima.

What is your main research theme at the Hiroshima Peace Institute?
I have been studying how horrible results have been wrought by the development and testing of nuclear weapons, and how American and world culture and society have been affected by them. In addition, through a project titled “Global Hibakusha Project,” I have been investigating an initiative to connect the nuclear victims throughout the world. In the project, young people in Republic of the Marshall Islands, a nation which was involved in a U.S. hydrogen bomb test at Bikini Atoll, and several other countries have been developed as memory keepers. They have also been interacting with the youth in Hiroshima via Skype, an internet video and also in person workshops.

As an American, what did you think about President Obama’s visit to Hiroshima?
It was a historic event. The U.S. media also reported it very positively. However, from my perspective, I am disappointed that he didn’t mention anything about a concrete path towards the abolition of nuclear weapons, including how American nuclear policy would be changed.

You mean a world without nuclear weapons cannot be realized soon.
Hiroshima has two significances to the U.S. While Hiroshima is known as a tragic city in the U.S. because of the atomic bombing, the U.S. used Hiroshima as an excuse to increase its nuclear arsenal during a cold war era. In those days, the U.S. government aroused its citizens’ sense of fear that the U.S. must have much more nuclear weapons than the former Soviet Union to not end up being like “Hiroshima.” Now, against a backdrop of a threat by the militant group known as the Islamic State, the nuclear weapons have gained prominent attention again. It could be a shocking fact to people in the A-bombed cities, but it’s still strongly believed in the U.S. that the nuclear weapons are necessary because of the tragedy, which occurred in Hiroshima.

Even if President Obama visited Hiroshima, the public opinion in the U.S. hasn’t been changed so much, has it?
In Japan, some people say that President Obama’s visit to Hiroshima has advanced a movement towards nuclear abolition. But I am afraid they may be too optimistic. Many Americans still believe they should maintain the option to keep nuclear weapons though they do also want to abolish them. It’s the same logic as the one for gun ownership: many U.S. households have a gun because they believe it might be necessary sometime in the future, although not everyone wants to use it.

If things are not changed, do you think a desire of people in Hiroshima to abolish nuclear weapons won’t take root in the nuclear nations?
You have to be more aware that a barrier to nuclear abolition, which the A-bombed cities should take focus on, is quite enormous. Even if a U.S. president advocates abolition of nuclear weapons, the real politics and military system won’t change so easily. The bottleneck is a giant military industry that has the power to influence the world of politics, and public opinion believing in nuclear deterrent force. I think just appealing for the inhumanity of nuclear weapons is not enough to fight against them.

Could you elaborate on it more?
I believe you should rather make an appeal based on the extensive moral framework of the whole society. As the living standard of the middle-class has declined in the U.S., more and more people have become pessimistic about their future. Meanwhile, the U.S. government is planning to spend a trillion dollars (about 100 trillion yen) for upgrading nuclear weapons over the next three decades. Is it acceptable to sacrifice living standard of people for such spending? Shouldn’t education and medical services be more prioritized than military affairs? Taking these perspectives into account, it’s important to appeal to international opinion opposing wars and military powers. If people in the A-bombed cities can collaborate with those working on these issues in the world, I believe you can generate a much bigger wave than now.

Robert Jacobs
Born in Chicago, the United States, Mr. Jacobs obtained a doctor’s degree at the University of Illinois, and came to Hiroshima in 2005 to serve as an instructor for the Hiroshima Peace Research Institute. He assumed his current post from this year. Studying history as his major, he has been researching the history and culture of nuclear technologies and nuclear victims. He has written books including “The Dragon’s Tail: Americans Face the Atomic Age.”