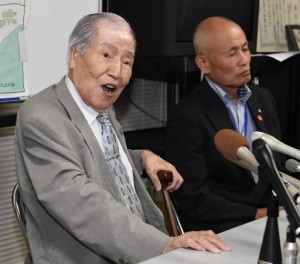 On October 7, the Japan Confederation of A- and H-bomb Sufferers Organizations (Nihon Hidankyo) learned that it had not been awarded this year’s Nobel Peace Prize. With growing attention paid to A-bomb survivors in and out of Japan in the wake of U.S. President Barack Obama’s visit to Hiroshima this past May, there was talk that A-bomb survivors might receive the prize. Shrugging off this result, the group’s members recommitted their efforts to continuing to convey the horror of nuclear weapons to the world.

“We have no reason to feel disappointed. The most important thing is reducing the number of nuclear weapons in the world to zero,” said Sunao Tsuboi, speaking evenly at a press conference held at the group’s headquarters in the Hiroshima Peace Hall. Mr. Tsuboi is the chairperson of the Hiroshima Prefectural Confederation of A-bomb Sufferers Organizations and one of the co-chairpersons of the Japan Confederation of A- and H-bomb Sufferers Organizations (Nihon Hidankyo).

When President Obama, the Nobel Peace Prize laureate in 2009, visited the Hiroshima Peace Memorial Park in May, Mr. Tsuboi shook hands with the president and told him that they should unite in their efforts to abolish nuclear arms. At the press conference held on October 7, Mr. Tsuboi stressed, “We must convey to the world more widely the message to rid our earth of all these horrific nuclear weapons.” He also expressed hope that Russian President Vladimir Putin, who will visit neighboring Yamaguchi Prefecture this December, will also pay a visit to the A-bombed city of Hiroshima.

At the Nihon Hidankyo office located in Minato Ward, Tokyo, the group had organized a venue for the press conference with three senior officials of the organization standing by. After the announcement of the prize, Mikiso Iwasa, 87, the co-chairperson of Nihon Hidankyo and a survivor of the Hiroshima bombing, stated, “If our organization had been awarded the Nobel Peace Prize, this would have been proof that the A-bomb victims did not die in vain. I feel deep regret.” On this day, Nihon Hidankyo submitted some 560,000 signatures from around the world in support of banning and eliminating nuclear weapons to the First Committee of the United Nations General Assembly, which deals with disarmament issues. They began gathering the signatures in the spring and are now determined to continue promoting their grassroots campaign.