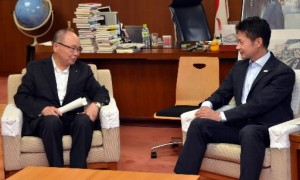 Dispatched by the Hiroshima prefectural government, a team of doctors and officials will leave for South America on October 2. They will offer medical consultations for A-bomb survivors in Brazil and four other countries before the two-week program concludes on October 15. They will also give advice about the application procedures to receive subsidies for medical expenses. Keiichi Hiramatsu, the head of the team and the president of the Hiroshima Prefectural Medical Association, met with Hiroshima Governor Hidehiko Yuzaki at the prefectural government office on September 30 before leaving Hiroshima.

The team, which is comprised of four doctors and three employees of the municipal and prefectural governments of Hiroshima, will be divided into three groups and visit a total of eight cities in Brazil, Argentina, Paraguay, Peru, and Bolivia. The team will give medical checkups and offer advice on health management based on the results of medical tests that survivors have undergone at local medical facilities. They will also give advice on applying for A-bomb disease certification and the procedures for obtaining reimbursement of their medical expenses. Full reimbursement for the medical expenses of A-bomb survivors living overseas began in January of this year. About 80 people will seek medical advice during this program, according to the Atomic Bomb Survivors Support Division of Hiroshima Prefecture.

Mr. Yuzaki said that survivors living in South America must be looking forward to receiving assistance from the doctors, and that they count on their support. Dr. Hiramatsu said, “Since A-bomb survivors are aging, they will seek various advice on their physical condition. We will give them helpful guidance regarding the management of their health.” Dispatching doctors to South America to aid A-bomb survivors began in 1985, and this marks the 18th team sent overseas.