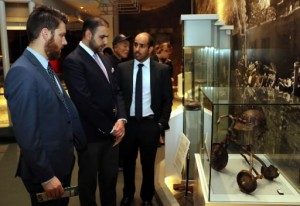 On October 5, 25 young diplomats from 25 nations visited the Peace Memorial Park in Naka Ward, Hiroshima and learned about the consequences of the atomic bombing. This is part of a training program undertaken by the United Nations to cultivate experts on disarmament issues.

The nations include nuclear weapon states like the United States, China, and India, with one diplomat per nation taking part in the training program. At the Peace Memorial Museum, the participants paused every so often to study the exhibits carefully, including the personal belongings of victims and panels which show the aftereffects of the atomic bombing.

Mojitaba Azizi Basati, 31, a diplomat in Iran’s Ministry of Foreign Affairs, said that he could now clearly grasp the damage done by the bombing. He added that he would make his most diligent efforts to resolve international issues not by force and the use of arms but through negotiations so that nuclear weapons are never used again. The participants also offered flowers at the Cenotaph for the A-bomb Victims and listened to the account of an A-bomb survivor in English.

The diplomats are visiting Japan from October 2 to 8. On October 4, they moved from Nagasaki to Hiroshima. On October 6, they will listen to a lecture at the Radiation Effects Research Foundation (RERF, located in Minami Ward, Hiroshima) then travel to Tokyo. This U.N. training program began in 1979. Since 1983, training participants have paid a visit to Hiroshima each year. A total of 872 diplomats have taken part in the training to date.