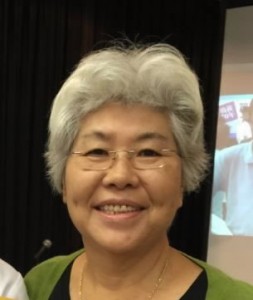 On October 12, the Hiroshima Peace Center Foundation, located in Saeki Ward, Hiroshima and chaired by Mamoru Tsuru, announced that Hiromi Peterson, 68, a second-generation A-bomb survivor living in Honolulu and a former Japanese language teacher at Punahou School in the U.S. state of Hawaii, has been selected as the recipient of the 28th Kiyoshi Tanimoto Peace Prize. The foundation recognized Ms. Peterson’s achievements in helping hand down memories of the atomic bombing and war to younger generations through peace education and international exchange efforts.

Ms. Peterson was born in Minami Ward, Hiroshima. Her parents and three siblings experienced the atomic bombing and her father suffered severe burns on the right side of his body. In 1972, she married an American man and moved to Hawaii. From 1984 to 2014, she worked as a Japanese language teacher at Punahou School, where U.S. President Barack Obama once studied. She published a Japanese textbook for junior high and high school students, which includes contents on the damage caused by the atomic bomb, and worked to promote peace education.

Ms. Peterson commented that it was a great honor to be awarded such a special prize, and that she will continue her mission of educating young people who can help build a more peaceful world. She will attend the award ceremony for the prize, which will take place in Naka Ward, Hiroshima on November 13.

The Kiyoshi Tanimoto Peace Prize was established in 1987 to carry on the spirit of the late minister Kiyoshi Tanimomto of Hiroshima Nagarekawa Church in Naka Ward, who devoted himself to providing support for A-bomb survivors. The prize is awarded to individuals and groups that are making efforts to promote a peaceful world.