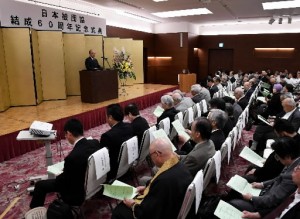 On October 12, the Japan Confederation of A- and H-Bomb Sufferers Organizations (Nihon Hidankyo) held a ceremony to commemorate the 60th anniversary of its founding at a hotel in Tokyo. About 160 people, including the board members of A-bomb survivors’ groups from across Japan, took part in the event. Looking back on the path it has resolutely pursued to promote the abolition of nuclear arms, the organization issued a message to the citizens of the earth, which reflects the urgent desire of its membership to realize a world without nuclear weapons.

Mikiso Iwasa, 87, the chairperson of Nihon Hidankyo, spoke at the event and said, in hindsight, “Because we were forced into the position of being survivors, the path of our struggle has not at all been smooth.” Considering the current state of the world, where the goal of abolishing nuclear arms is still distant, he appealed with the words, “Our work is not done. Let us continue striving toward this goal for as long as we live.”

Toshiki Fujimori, 72, the assistant secretary general of Nihon Hidankyo, read out the organization’s message. Referring to current international conditions involving nuclear weapons, the message warns that the danger of nuclear war is growing. It goes on to say, “It is the mission of the survivors, who endured the atomic bombings, to build a fortress of peace and prevent such tragedies from being repeated,” and appeals for support for the organization’s global signature drive, which promotes banning and eliminating nuclear arms.

From Hiroshima Hidankyo, three deputy chairs attended the event. One participant, Seiko Ikeda, 84, reviewed the history of the organization’s efforts and said, “I think by engaging in mutual support with other survivors, and getting involved in the group’s peace activities, I was able to save myself, too.” She continued, “I don’t want anyone else to have to experience the suffering we faced because of the atomic bombing. I will continue to act as long as I can be of some help.”

Nihon Hidankyo was established on August 10, 1956 in the city of Nagasaki.