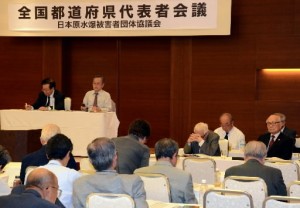 On October 13, at a gathering of prefectural representatives of the Japan Confederation of A- and H-Bomb Sufferers Organization (Nihon Hidankyo), which took place in Tokyo, the secretariat reported that the group will carry out a first-ever survey of the physical and mental states of second-generation A-bomb survivors in Japan. Through this effort, the group will seek to understand the second-generation survivors’ physical condition, anxiety, and worries, and make use of these findings to pursue further efforts in the future.

With the aid of A-bomb survivors’ groups across the nation, Nihon Hidankyo plans to distribute survey sheets which pose 14 questions, including about their medical history, their feelings about being a second-generation survivor, and their level of interest in the work of Nihon Hidankyo. These survey sheets will be collected by March 2017, experts will analyze the data, then a report will be compiled by the summer.

The survey is among the projects which mark the 60th anniversary of the founding of Nihon Hidankyo. A staff member of the secretariat said, “We want to gather the opinions of many people and have these reflected in requests made to the central government and local governments. We also want to make use of this input to redouble the efforts of second-generation survivors.” Nihon Hidankyo is unable to determine precisely how many second-generation survivors there are, but hopes to reach thousands of people with the survey.

At the meeting of representatives held on October 13, Nihon Hidankyo confirmed that it will strengthen its appeal in multiple languages on the Internet and via other means to promote its global signature drive which seeks to ban and eliminate nuclear weapons. With its membership declining, the group also discussed its deteriorating financial state.