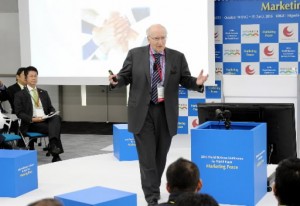 On October 14, the “World Business Conference for World Peace,” which seeks to promote peace through business activities, opened its two-day meeting at Hiroshima University’s Higashi-Senda Innovative Research Center in Naka Ward, Hiroshima. The conference has been organized by a steering committee (chaired by Hiroshima Governor Hidehiko Yuzaki) composed of Hiroshima prefectural government and local businesses. On the first day of the meeting, Philip Kotler, a professor at the Kellogg Graduate School of Management of Northwestern University, delivered the keynote speech, followed by an exchanges of ideas and views among business leaders and experts on ways to pursue business activities that can contribute to building peace.

Professor Kotler, who is widely known as a leading expert in modern marketing theory, stressed that companies which take exemplary action to promote peace will be valued highly by society. Pointing out the possibility of making contributions through corporate campaigns, he appealed to some 250 invited business leaders to focus not only on profits but to also work for the public good.

The day’s five sessions considered various themes and featured business leaders and representatives from non-governmental organizations (NGOs), from Japan and abroad, discussing the topics that were presented. In the session which focused on roles that companies can play in abolishing inhumane weapons, Motoko Mekata, an executive board member of the Japan Campaign to Ban Landmines and a professor at Chuo University, suggested that corporate campaigns can change the consciousness of people who tend to regard overseas conflicts and the use of such weapons as events occurring in far-off parts of the world.

The 2016 World Business Conference is the second such gathering, following the first meeting held in 2013. On October 15, two sessions will discuss the roles of the business community in the A-bombed city of Hiroshima, followed by a panel discussion involving Professor Kotler and the Governor Yuzaki.