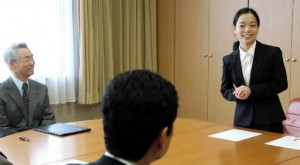 Eri Takahashi, 22, a fourth-year student in the Faculty of Policy Studies at the University of Shimane, located in Hamada, Shimane Prefecture, has been chosen to take part in the Ship for Southeast Asian Youth Program, which is organized by the Cabinet Office of Japan. The aim of this program is to promote friendship and mutual understanding among young people from Japan and the Association of Southeast Asian Nations (ASEAN). Ms. Takahashi, who was raised in the Mukaishima area of Onomichi, Hiroshima Prefecture, is making preparations to convey the devastation of the atomic bombing to the other participants. She said, “I believe that people around the world hold the same wish for realizing a peaceful planet.”

For her departure on October 26, she is preparing materials that include a video of an A-bomb survivor’s account. She will share these materials with about 280 participants from 10 nations as well as 40 Japanese delegates. After this presentation, the audience will share their impressions.

When Ms. Takahashi was a student at Josuikan Junior and Senior High School in Mihara, Hiroshima Prefecture, she studied abroad in Thailand for two short stays. In her second year of junior high school, she was in Thailand on August 6. At that time, she talked about the atomic bombing of Hiroshima with her Thai classmates. The Thai students, however, told her that this was something they were learning for the first time. Because one of her relatives lost a family member in the atomic bombing, she was struck by the large difference in awareness of this event between Hiroshima and Thailand.

This past August 6, Ms. Takahashi used LINE, a free messaging app, to contact the Japanese participants in the program and ask them if they had watched the Peace Memorial Ceremony in Hiroshima. But the Japanese students replied that they hadn’t watched it or didn’t know when the ceremony was aired. As a consequence, she became determined to take up this topic for her presentation on board the ship, thinking that, with an increasing number of even Japanese citizens lacking awareness, it was incumbent on her to convey the horror of the atomic bombing.

The ship will leave Tokyo on October 26. The participants will visit Vietnam, Indonesia, Singapore, and Thailand to learn more about these local cultures until December 14. On board, she will also introduce some special local products, such as Sekishu-Banshi paper, the local handmade paper from Hamada, Shimane Prefecture, and the sailcloth goods made in Onomichi, Hiroshima Prefecture.

Ms. Takahashi said with enthusiasm, “As seen in the visit by U.S. President Barack Obama, this year is a very significant time for Hiroshima. I want to do my best and convey everything I can to others.”