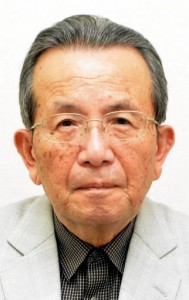 The Radiation Effects Research Foundation (RERF, located in Minami Ward, Hiroshima) will dispatch Mitsuo Kodama, 84, an A-bomb survivor and resident of Minami Ward, to the annual meeting of the Radiation Research Society (RRS), which will take place in Hawaii from October 16 to 19. Mr. Kodama experienced the atomic bombing of Hiroshima near the hypocenter and has battled various types of cancer. This marks the first time that RERF is dispatching an A-bomb survivor overseas to share his account and convey the inhumane suffering caused by radiation from nuclear weapons.

Mr. Kodama was exposed to the atomic bomb at his school, about 870 meters from the hypocenter. He was 12 at the time, a first-year student at First Hiroshima Prefectural Junior High School (now Kokutaiji High School). To date, he has undergone 20 operations for cancer, including cancer of the stomach and skin, which show an increasing incidence among A-bomb survivors recently, and he has cooperated in RERF’s research.

Every year, from 500 to 1,000 academics and others from around the world attend the RRS annual international conference, which addresses the effects of radiation on the human body. On the first day of presentations by RERF researchers, Mr. Kodama will recount his experience in English for about 30 minutes, showing images of his own cells with chromosomal abnormalities, which were caused by the atomic bombing.

Mr. Kodama said, “I plan to stress that nuclear weapons can annihilate the human species.” Otsura Niwa, the chairman of RERF, said, “Researchers are likely to view A-bomb survivors as a group of survey subjects. I want everyone to know the terrible effects that the atomic bombing had on the lives of individuals.”