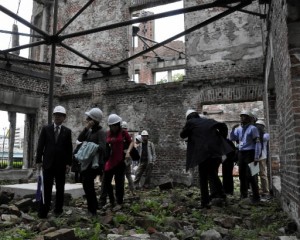 On October 16, five ambassadors and others toured the A-bomb Dome, located in Naka Ward, Hiroshima and Itsukushima Shrine, located in Hatsukaichi. These two places are World Heritage sites. The tour was organized, for the first time, by an executive committee consisting of such entities as Hiroshima Prefecture, the City of Hiroshima, and Hatsukaichi City with the aim of conveying to the world the message of peace embodied by the A-bomb Dome and the special charms of Itsukushima Shrine. This December will mark the 20th anniversary since the two locations were added to the World Heritage list. The participants were able to step inside the dome structure and reflect on the significance of history.

Nine people, including ambassadors of the United States, Mexico, Denmark, Chile, and South Korea, along with members of the media from these nations, took part in the tour. After entering the grounds of the A-bomb Dome, which is normally off-limits, they looked intently at the iron framework which fortifies the inside of the dome and the scattered rubble left by the A-bomb blast.

At the Peace Memorial Museum, the group took in artifacts like the paper cranes offered by U.S. President Barack Obama when he visited Hiroshima this past May. They also went up to the observation desk of the Hiroshima Orizuru Tower, which commands a view of the A-bomb Dome, the Peace Memorial Park, and Miyajima Island, located in the city of Hatsukaichi.

They moved from the park to Miyajima Island by motorboat, which departed from the pier at the Motoyasu River, near the A-bomb Dome. On the island, the participants visited Itsukushima Shrine and experienced Zen meditation at the Misen Hondo Hall.

Carlos Almada, 65, the ambassador of Mexico to Japan, said he was very moved by his visit to the A-bomb Dome and his reflections on those who had lived near the building at the time of the bombing. The A-bomb Dome and Itsukushima Shrine are spiritual places, he said, not just sightseeing spots, and he plans to share their appeal to the people of his country.