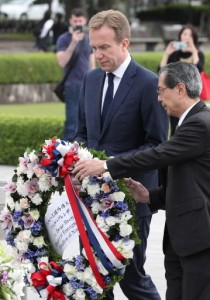 On October 18, Norway’s foreign ministry, Børge Brend, visited the Hiroshima Peace Memorial Park for the first time. After mentioning the devastation wrought by the atomic bombing, Mr. Brend said that it is vital to advance nuclear disarmament within the framework of the Treaty on the Non-Proliferation of Nuclear Weapons (NPT).

The Norwegian government held the first international conference on the inhumanity of nuclear weapons in March 2013. However, at the open-ended working group on nuclear disarmament, which took place at the United Nations this past August, Norway abstained from voting on the draft of a report recommending that the U.N. General Assembly begin negotiations on a treaty to legally ban nuclear arms. Mr. Brend said to reporters in the Peace Memorial Park that we should unite in our vision for a world without nuclear weapons and he stressed the importance of pursuing nuclear reductions within the NPT framework.

Mr. Brend arrived in Japan on October 16 on official business, and met with Hiroshima Mayor Kazumi Matsui at Hiroshima City Hall on October 18. During the meeting, Mr. Brend asked Mr. Matsui to help create an environment where a prohibition on nuclear weapons can be discussed. While being guided through the Peace Memorial Park by Yasuyoshi Komizo, the chairperson of the Hiroshima Peace Culture Foundation, Mr. Brend offered flowers at the Cenotaph for the A-bomb Victims then toured the Peace Memorial Museum. He also listened with keen interest to an A-bomb survivor’s testimony of the atomic bombing at the International Conference Center Hiroshima.