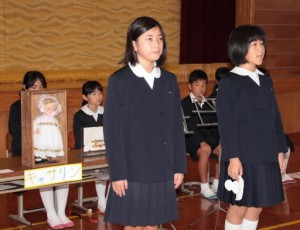 Elementary school students shared the story behind a special “blue-eyed doll” at a gathering held on October 18. The fifth and sixth graders at Imafuku Elementary School in Hamada, Shimane Prefecture, made a presentation about the doll, which was sent to Japan as a gift from an American missionary in 1927, prior to the outbreak of World War II. The 11 students also talked about visiting the Hiroshima Peace Memorial Museum in June and seeing the paper cranes given by U.S. President Barack Obama during his visit to Hiroshima in late May. The gathering of students was an opportunity to give serious thought to the importance of peace and friendship.

“Katherine” is one of the dolls presented by Dr. Sidney Lewis Gulick, an American missionary, as a symbol of friendship between the United States and Japan. After the Pacific War broke out in 1941, many of the dolls that came from the enemy nation were disposed of. But “Katherine” was hidden in the attic of the school building.

The doll was discovered when the school building was rebuilt in 1971. It was placed in a glass case and has been on display in the entrance hall of the school since 1993. Since 1995, the school has held a gathering on October 18, the anniversary of the doll’s arrival at the school.

At this year’s gathering, sixth graders read aloud President Obama’s message that is displayed with his paper cranes at the museum in Hiroshima. They said that his message and Dr. Gulick’s feelings had much in common.

The students also explained that only one other doll from Dr. Gulick has survived in the prefecture, and that doll is kept at Nima Elementary School in Ohda. They also mentioned that Dr. Gulick’s grandson gave a doll called “Helen” to the school. The 11 students said to the 43 younger students of the school, “Let’s appreciate the treasures of Imafuku Elementary School, and make friends with children all over the world.”

Sixth grader Aona Maeda, 12, said, “Next year will be the 90th year since the doll came to our school. I hope the younger students will learn more about the doll.”