Two Hiroshima volunteers to be dispatched to U.S. to give readings at Atomic Bomb Exhibition 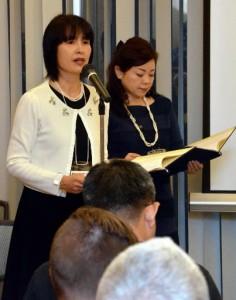 Two recitation volunteers of the Hiroshima National Peace Memorial Hall for the Atomic Bomb Victims, located in Naka Ward, will be dispatched to the Hiroshima-Nagasaki Atomic Bomb Exhibition, which is now taking place in Chicago, Illinois. On October 20, they rehearsed their readings, in English, of A-bomb accounts and poems written by A-bomb survivors at the Peace Memorial Hall. They reaffirmed their resolve to convey the reality of the range of consequences brought about by the atomic bomb and the desires of the A-bomb survivors.

The two volunteers, Ikuko Katsura, 56, a resident of Asakita Ward, and Mayumi Yamamoto, 53, a resident of the city of Kure, are involved in the program to give readings at the Peace Memorial Hall. On October 29, they will read one A-bomb account and five poems written by A-bomb survivors at the Atomic Bomb Exhibition, which the cities of Hiroshima and Nagasaki are holding at the Japanese Culture Center in Chicago. They will also give readings at the University of Chicago, Loyola University, and DePaul University from October 26 to 28.

On October 20, they conducted a rehearsal in front of about 40 international visitors. Reading with emotion, they recited such passages as “My mother and grandmother remained on the other side of the debris and they gradually dropped out of sight” and “My younger brother was groaning. Then he begged for water, saying, ‘Water! Please! Water!’”

This is the first time that the Peace Memorial Hall has dispatched recitation volunteers abroad. Ms. Katsura said that she wants to convey the spirit that “the tragedy never be repeated,” which is imbued in the accounts and poems. Ms. Yamamoto stressed that she wants to do what she can, however little, to further the cause of peace.