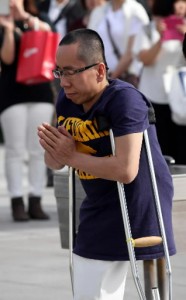 Duc Nguyen, 35, a well-known Agent Orange victim who was born as a conjoined twin and survived a separation operation, visited the Hiroshima Peace Memorial Park in Naka Ward on October 20. It was his first visit to Hiroshima. The Agent Orange chemical was sprayed by the U.S. military to defoliate forests during the Vietnam War. Mr. Nguyen said that the people of Hiroshima and Vietnam share the same pain and suffering, and he would like to overcome the past and create a better future together.

At a press conference at the International Conference Center Hiroshima, Mr. Nguyen said that he was very shocked by the fact that one single atomic bomb could cause such tremendous suffering to tens of thousands of people, and he emphasized that he opposes nuclear and chemical weapons because they are immoral weapons that can annihilate all human beings.

Mr. Nguyen is known as the younger of the “Viet and Duc” brothers who were born as conjoined twins. He was invited to Japan by the Hiroshima Vietnam Peace and Friendship Promotion Council based in the city of Higashihiroshima. He will give a talk about the damage caused by Agent Orange and his current life as the father of two children at the Higashihiroshima Arts & Culture Hall Kurara at 6:30 p.m. on October 21.