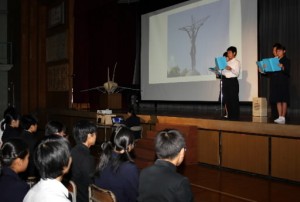 On October 25, the anniversary marking the death of Sadako Sasaki, a girl who died of A-bomb induced leukemia 10 years after the Hiroshima bombing, Noboricho Junior High School held a peace gathering. The school is located in Naka Ward, Hiroshima. During the event, the students of each school year offered a presentation or performance, respectively, such as reporting on what they have learned about peace or reading out a play. The students pledged to continue making efforts to promote peace.

First, the school’s roughly 260 students made silent prayers in the gymnasium. The third-year students then gave a presentation about current conditions in the world, showing slides to describe information that included the ongoing state of terrorist attacks and conflicts. They appealed to other students by saying, “It’s very important that we keep on conveying a message of peace from our school.” Next, student representatives took the stage to display a large paper crane, measuring about 1 meter tall by 2 meters wide, which they folded in the hope of realizing a peaceful world. They also performed a recitation play on the story of the Children’s Peace Monument, which was inspired by Sadako’s story.

Noboricho Junior High School has been holding peace gatherings around the anniversary of Sadako’s death since the year 2000, when The Monument of the Paper Crane was installed near its school gate. Moe Ukiana, 15, the president of the student council, said, “We want to learn more about war damages both in Japan and other nations and raise our awareness for peace.”