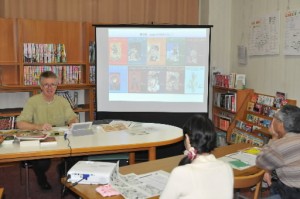 A lecture explaining how the manga story Barefoot Gen (in Japanese, Hadashi no Gen) has spread widely overseas was held at the Hiroshima City Manga Library on October 22. Barefoot Gen is a manga series by the late Keiji Nakazawa that depicts the atomic bombing of Hiroshima and its aftermath. Ronald Stewart, 52, an associate professor at the Prefectural University of Hiroshima, talked about the appeal of the work, saying that it has had the greatest impact on the world among books on the atomic bombings. Mr. Stewart is from Australia and specializes in cultural history.

Thirteen people attended the lecture. According to Mr. Stewart, who has studied Japanese manga for the past 20 years, the first translated version of Barefoot Gen was published in English by a group of volunteers in the United States in 1978. He said that it was hard to find stores to sell the book back then and only a few shops handled it.

A turning point came in 2004. The professor said that when a U.S. publisher issued a new translated version of the full 10-volume series, Barefoot Gen began to be accepted as a classic manga story and an educational resource. To date, these books have been translated into over 20 languages. Mr. Stewart stressed that Barefoot Gen is emblematic of the Japanese comic book form and that the work can serve as a gateway for Americans and others to understand the experiences of A-bomb survivors.

Mr. Stewart pointed out the difficulty of translating the manga by comparing the same scene in the original Japanese version with the English translation. Offering examples, he said that “Hiroshima” in kanji characters and “Hiroshima” in katakana (which is expressly used to convey the A-bombed city of Hiroshima) cannot be distinguished in English and satirical expressions only used in Japanese and expressions rendered in dialect are also hard to translate.

Keiko Otaki, 54, a housewife and resident of Minami Ward, was in attendance. “I learned about the various hardships faced by the manga before it spread more widely overseas. I hope that it will become even more well known in the future.”