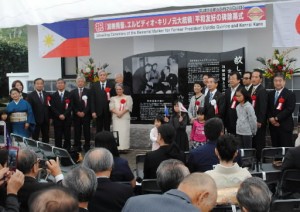 A memorial monument symbolizing peace and praising the friendship between artist Kano Kanrai and the late Philippine President Elpidio Quirino has been erected at the Kano Museum of Art in Hirose-cho, Yasugi City. Kano Kanrai (1904-1977) was born in Yasugi City and, after World War II ended, sought amnesty for Japanese nationals who were tried as war criminals in the Philippines. An unveiling ceremony for the monument was held on October 23 with some 200 people in attendance.

This year marks the 20th anniversary of the opening of the Kano Museum as well as the 60th anniversary of the normalization of diplomatic ties between Japan and the Philippines. Those connected to the museum formed a construction steering committee and erected the monument with donations totaling 3.5 million yen that were contributed by some 650 people nationwide.

The unveiling ceremony was attended by descendents of the former president. Akemi Abe, 66, a figure artist and creator living in Yonago City who held an exhibition at the Kano Museum this past summer, presented a work modeling Mr. Quirino’s wife and three children who were killed by Japanese soldiers.

Kayoko Kano, 71, Mr. Kano’s fourth daughter and president emeritus of the museum, said in her address, “I’d like the friendship between my father and Mr. Quirino to endure forever in a visible form and I want to share their thoughts with everyone here.” On behalf of Mr. Quirino’s family, Eddie Quirino, 66, the president’s grandson, expressed his deepest gratitude for the goodwill and love for his grandfather.

When a friend of his faced the death penalty at a military tribunal in the Philippines, Mr. Kano began appealing for amnesty for the Japanese war criminals in 1949 and devoted himself to this campaign. After receiving 43 letters of petition from Mr. Kano, Mr. Quirino pardoned and freed 105 Japanese prisoners in 1953.