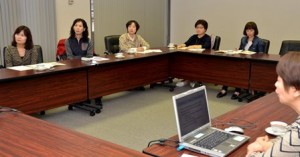 On October 26, five South Korean nurses began learning about medical examinations for atomic bomb survivors and the medical problems related to their aging. The training program, held at the Hiroshima Atomic Bomb Casualty Council (Gentaikyo) facility in Naka Ward, is being provided by the Hiroshima International Council for Health Care of the Radiation-exposed (HICARE), which is comprised of the Hiroshima prefectural government, the City of Hiroshima, and other entities.

Saeko Fujiwara, the director of Gentaikyo’s Health Management and Promotion Center, explained the current situation of the A-bomb survivors by saying that, due to their aging, it is becoming harder for them to visit the center to undergo medical examinations. She stressed that it is important to work together with practicing physicians in the community not only to provide medical treatment for such diseases as cancer but also to offer health management to help ensure that they maintain a good quality of life.

The nurses also observed examination rooms. Yu Jaesun, 54, who works at the Kyung Hee University Medical Center in Seoul, said that the aging of A-bomb survivors is also a big issue in South Korea and that she would like to make use of what she learns in Hiroshima to educate nurses.

The training program will continue until October 28. The South Korean nurses have already visited Hiroshima University’s Research Institute for Radiation Biology and Medicine, located in Minami Ward, to learn about the effects of radiation on human health and the medical treatment provided for A-bomb survivors.