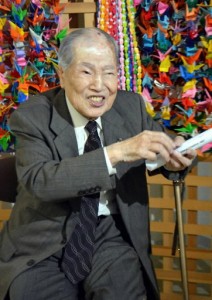 The U.N. General Assembly First Committee (on Disarmament and International Security) has adopted a resolution to begin negotiations on establishing “a treaty to outlaw nuclear weapons.” On October 28, survivors of the atomic bombings of Hiroshima and Nagasaki welcomed this development, considering it “progress” toward the elimination of nuclear weapons. However, Japan, the only nation to have experienced nuclear attack, voted against the U.N. resolution, in step with the United States and other nuclear powers. Japan’s stance has triggered considerable anger among the public.

“I’m very pleased with the adoption of the U.N. resolution calling for negotiations on a treaty banning nuclear weapons. I hope this issue will be discussed much more from a humanitarian perspective so that all nuclear weapons will be banned and eliminated,” said Sunao Tsuboi, 91, the chairperson of the Hiroshima Prefectural Confederation of A-bomb Sufferers Organizations, with a smile on his face at a news conference held at the organization’s headquarters in the Hiroshima Peace Hall, located in Naka Ward.

As global concerns over the humanitarian impact of nuclear weapons have grown, demands for starting full-fledged discussions on a treaty to ban nuclear weapons have also increased. The leadership and citizens of the A-bombed city of Hiroshima, who have persistently appealed for the necessity of a nuclear ban treaty, unanimously welcome the global community’s decision and hold high hopes for these coming discussions.

For that reason, the Japanese government’s opposition to the resolution, which stems from the nation’s reliance on U.S. nuclear deterrence, has increased Hiroshima’s distrust of the central government. Mr. Tsuboi said that the concept of nuclear deterrence itself can never be acceptable, and lamented this state of affairs by asking, “Why can’t the government agree that the prohibition of nuclear weapons is an issue that should be discussed by everyone together?” Kunihiko Sakuma, 71, the chair of the other Hiroshima Prefectural Confederation of A-bomb Sufferers Organizations, also expressed indignance by saying that the Japanese government should revise its stance.

Protests against the government’s position have already begun to spread. The citizen’s group “Hiroshima Alliance for Nuclear Weapons Abolition” sent letters of protest for Prime Minister Shinzo Abe and Foreign Minister Fumio Kishida to the Cabinet Office and the Foreign Ministry, respectively, by fax. Haruko Moritaki, 77, co-chair of the citizen’s group, criticized the government’s action by saying that despite being expected to lead global calls to launch negotiations for banning nuclear weapons, the Japanese government took the exact opposite stance and has deeply disappointed the world. The City of Hiroshima sent a letter in the name of Mayor Kazumi Matsui to Foreign Minister Fumio Kishida at the Foreign Ministry that said, “The government’s position has betrayed the desire of all A-bomb survivors, and this development is extremely regrettable.”

Setsuko Thurlow, 84, an A-bomb survivor from Minami Ward, Hiroshima, watched the voting at the U.N. General Assembly First Committee through a live online report from her home in Toronto, Canada. She said angrily, “I find the Japanese government’s inconsistency in its words and actions distressing and shameful. As a global citizen, I strongly call on all nations to participate in the negotiations that will begin next spring to establish a nuclear ban treaty.”