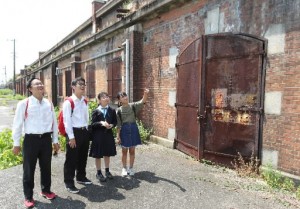 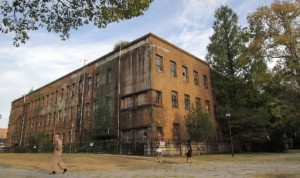 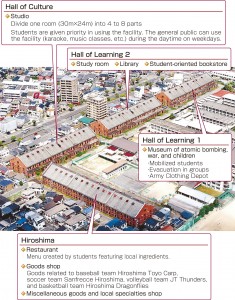 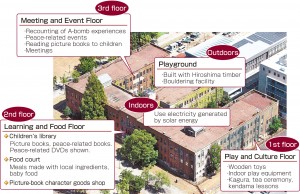 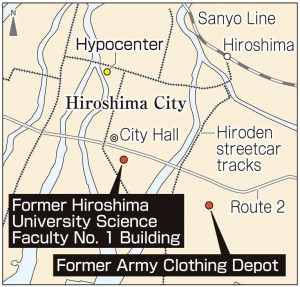 Part 37: A-bombed buildings should be turned into facilities for peace and culture

As time continues to pass, buildings that were exposed to the blast and heat rays of the atomic bomb 71 years ago are disappearing. In addition to the fact that these structures are aging, the nation’s quake-resistance standards have become stricter. As a result, it has grown more and more costly to preserve and make use of these buildings.

The former Army Clothing Depot, located in Minami Ward, and the former Science Faculty No. 1 Building, on the old Hiroshima University campus in Naka Ward, have sat unused for a long time. These buildings are owned by the national and prefectural governments and the city government, respectively. The junior writers would like to make some suggestions for putting these buildings back into use.

The former Army Clothing Depot, one of the oldest ferroconcrete structures in Japan, is also the nation’s longest row of brick buildings. The former Science Faculty No. 1 Building is located in the center of the city and should be used as a site for intellectual activities.

We hope that these “witnesses” to the atomic bombing will be maintained not as mere monuments to the past but also used in such a way that they can continue conveying messages for nuclear abolition and the fulfillment of a peaceful world.

The former Army Clothing Depot sits about 2.7 kilometers from the hypocenter. It consists of ferroconcrete buildings that are three stories tall, their outer walls made of red brick. In all, there are three 91-meter-long buildings lying north and south, and one 106-meter-long building stretching east and west, creating an L-shaped structure.

These buildings, built in 1913, were not damaged by fire in the atomic bombing. But the iron doors of the three buildings that face west were warped by the A-bomb blast and still show signs of this damage. In the aftermath of the bombing, the depot became a temporary aid station for many survivors. After the war ended, the site was used by Hiroshima Higher Normal School (today’s Hiroshima University), Hiroshima Technical High School, and Nippon Express, a transport company.

Proposals to put the depot to use as a museum or art museum have been made, but were not realized and the site remains idle. The Geiyo Earthquake of March 2001 registered a lower 6 on the Japanese seismic intensity scale of 7, but did not damage the depot. Because the windows are covered with plywood, the inside of the buildings is dark and quiet. Yoko Ito of Hiroshima Prefecture’s Property Administration Division said she hopes that the buildings will be used in a way that pleases everyone in the prefecture. (Ai Mizoue, 14)

A number of junior high schools and high schools are found near the former Army Clothing Depot, which makes the site a convenient place for students to visit. Making the most of its location, it could be turned into an educational facility for students from elementary schools to universities. The junior writers adopted a student’s point of view to consider how the site can be beneficial to students and what role these A-bombed buildings can play.

For each of the four buildings, we chose a concept. The theme for two buildings would be “Learning,” with one building turned into a museum that focuses on the atomic bombing, war, and children. In this building there would be explanations on such things as the history of the Army Clothing Depot, the children who evacuated to rural areas in groups prior to the bombing, and the older students who were mobilized to work for the war effort. The other building would house a library, a bookstore, and a study hall where students could study in a quiet setting.

The themes of the other two buildings would be “Culture” and “Hiroshima.” The building for culture would be a place where children can engage in activities like playing musical instruments and dancing. Soundproof rooms would be available for many children to take part. The “Hiroshima” building would be used mainly for students on school trips. The depot is not far from Route 2, and tour buses could park in the area next to the buildings.

At this one facility, people could learn about the atomic bombing and war, as well as eat or buy local specialties and locally produced food. (Harumi Okada, 17)

The former Science Faculty No. 1 Building was built in 1931 as the main building for the Hiroshima University of Literature and Science. It is a three-story ferroconcrete building and was U-shaped when first completed, but an extension was built two years later, making it E-shaped.

In June 1945, part of the building was turned into the Chugoku Regional Superintendency-General, an administrative office in charge of overseeing the region in case the country was divided in the anticipated attack on the Japanese mainland. The structure, located 1.4 kilometers from the hypocenter, was gutted by fire, leaving the outer shell. Of the people who were inside the building at the time of the bombing, 36 died on the spot and 71 were injured.

Classes resumed in the building in September 1946. After the nation’s educational system was reformed in May 1945, it was used as a school building for Hiroshima University’s Faculty of Science. Following that faculty’s move to Higashihiroshima in 1991, the building has stood unused. (Hisashi Iwata, 15)

Place for families relax and interact

There are not many places for children to play in the area of the Science Faculty No. 1 Building, so we suggest that the site become a place where small children through the early elementary grades could enjoy with their families. At the same time, given the opportunity to be exposed to Hiroshima’s history and historical buildings, children would develop a desire for peace.

First, we propose that the central part of the building that was added later be removed and a playground built on the grounds outside. Local timber can be used for the playground equipment and solar panels installed on the rooftop to provide electricity.

Inside, each floor of the building will have a different theme. The first floor would be a children’s play area and a place for cultural exchange activities. Children could play with wooden toys and learn traditional culture, including kagura, Shinto music and dancing, and tea ceremony.

The second floor would provide opportunities to learn about peace. There could be a library for children with books and DVDs connected to peace education. Another space would be designated for families with babies. There would also be a shop that sells goods featuring picture-book characters and a food court that serves baby food and meals made with locally produced ingredients.

The floor plan of the third floor would not change in order to preserve the atmosphere of the building that survived the atomic bombing. This floor could be used for meetings, presentations about A-bomb experiences, and peace-related events. In this way, we hope that the site could contribute to Hiroshima’s development and its ability to convey messages of peace. (Ishin Nakahara, 18)

Some of these costs could be covered by pursuing such methods as crowdfunding and a special tax system by which people would pay part of their taxes to particular municipalities. This would also enable people living outside of Hiroshima to learn about these buildings and their value. If they donate toward the renovation work, they would then want to visit these buildings. Another good way to raise funds would be through public “barrel donations,” which have helped the local professional baseball team overcome financial difficulties.

To keep down the costs, the IPH (Inside Pressure Harding) method could be employed. This method is used to repair and reinforce structures by filling cracks, even small ones, with resin. At the same time, it also helps prevent rust. (Ai Mizoue, 14)

I visited the former Army Clothing Depot to gather information for our article and found that its steel windows are badly warped. It brought home to me how the hot blast of the A-bomb not only damaged this building but also burned down the entire city center. Inside the building it was dark and scary. When we were discussing how to make use of the former Science Faculty No. 1 Building, I was surprised by the idea of demolishing the central part of the E-shaped building and turning the space into a playground. I had been considering how to use the building without tearing down any part of it. I hope that both sites will undergo renovations and be used by many people. (Kotoori Kawagishi)

This was the first time I learned about buildings that survived the atomic bombing. It’s amazing that these old buildings have been preserved up to now. But other A-bombed buildings are being demolished. More of these buildings should be reused. I will consider more ideas for the use of these buildings. (Yui Morimoto)

It was very difficult to develop plans for using these buildings while taking advantage of the fact that they survived the atomic bombing as well as analyzing the needs for such a project. It was the first time I saw the former Army Clothing Depot. For buildings like this to be utilized, it’s important to raise awareness that the A-bombed buildings are not being used. (Nanaho Yamamoto)

We went into the buildings of the former Army Clothing Depot. But we were unable to enter the former Science Faculty No. 1 Building because our safety couldn’t be guaranteed. I wondered why the building has been kept if it isn’t safe. I hope that even a small part of our ideas will be reflected in actual discussions on how to make use of these buildings. I hope the decision to use them will be made soon so more people can benefit from them. (Ishin Nakahara)

For me, this theme hit close to home. As I’ve been growing up, I’ve witnessed how Higashisenda Park, where the former Science Faculty No. 1 Building is located, has been transformed. Because I used to play in the park as a child, I felt a little sad when I found that many trees had been cut down and a number of new buildings have been constructed. Whenever I pass by the park, I imagine what sort of facilities should be built there. I’m really happy that I can share my ideas with other people through this article. (Harumi Okada)

I visited the former Army Clothing Depot. It was a good experience because I’ve been interested in the depot. I had never gone into the buildings before, so it was very interesting. I hope our ideas will be used when considering the actual plan for the site. (Hisashi Iwata)

Since these buildings are located close to us, I feel strongly that they should be used. I hope our ideas will be materialized, but the most important thing is that these buildings make their presence and their value felt as they continue conveying to people how important peace is. (Ai Mizoue)

What is Peace Seeds?
Peace Seeds are the seeds of smiles which can be spread around the world by thinking about peace and the preciousness of life from various viewpoints. To fill this world with flowering smiles, 30 junior writers, from the first year of junior high school to the third year of senior high school, choose themes, gather information, and write articles.