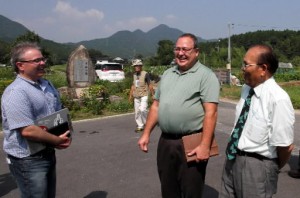 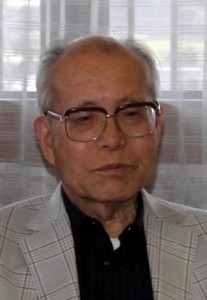 A documentary film titled “Paper Lanterns,” which features the story of American prisoners of war who were killed as a result of the atomic bombing of Hiroshima, will be screened in the city of Yanai, at the Active Yanai venue, on November 12. The screening was organized by local residents of Ikachi, where a U.S. bomber crashed. The bomber was carrying several of the American soldiers who were then held at a POW camp in Hiroshima and died as a consequence of the atomic bombing. Shigeaki Mori, 79, a local historian from Hiroshima, will attend the screening and address the audience. He is a resident of Nishi Ward, Hiroshima and an A-bomb survivor. This past May, he had a personal exchange with U.S. President Barack Obama at the Hiroshima Peace Memorial Park.

“Paper Lanterns” was created by American director Barry Frechette, 46, who followed the trail of the A-bombed soldiers in Hiroshima and other locations. In August 2015, Mr. Frechette visited Ikachi with the nephew of one of the American soldiers and Mr. Mori, who has researched the fate of the captured soldiers for many years, and filmed residents who witnessed the plane crash talking about what they saw.

Although the six soldiers were able to parachute from their stricken plane in Ikachi, they were taken to Hiroshima and lost their lives there in the atomic bombing. According to the steering committee for the event, the film was completed this spring and screenings have already taken place in Tokyo and some cities in the United States.

After the war ended, the residents of Ikachi reached out to the captain of the downed plane who had been transferred to Tokyo before the A-bomb was dropped on Hiroshima. In 1998, they erected a peace monument near the location where the plane crashed. Masanori Takenaga, 65, the committee leader who attended a press conference at Yanai City Hall on October 20, said, “In war, there are neither winners nor losers, and the grief it brings is the same for all. I’d like as many people as possible to know about the close ties that have developed between the residents of Ikachi and the families of the American soldiers.”

At 2:00 p.m. on November 12, Mr. Mori will speak about President Obama’s “Hiroshima Speech.” In his talk, he will reflect on the moment he was embraced by Mr. Obama in the Peace Memorial Park following the president’s speech. Mr. Mori’s talk will be followed by the screening of the film.

Mr. Frechette will also visit Ikachi. Although admission to the film is free, attendance is limited to elementary school children and above and a reservation is required. The first 410 reservations will be accepted at six locations in the city including City Hall and the Ikachi community center from October 25. For further information, contact the Ikachi community center at 0820-26-0001.