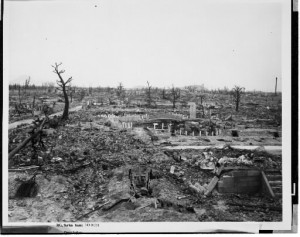 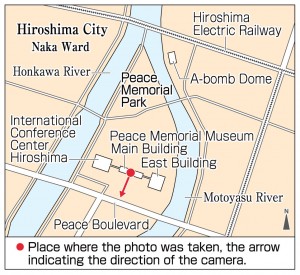 Two months after the atomic bombing of Hiroshima, a photo was taken by the United States near the site where the main building of the Peace Memorial Museum now stands. The photo, which is on display at the building which formerly housed the Hiroshima Branch of the Bank of Japan, is a valuable record in that it provides a precise depiction of the destruction that hit the Nakajima district, where temples and shops stood side by side before the bombing occurred. With an excavation now taking place on the grounds of the museum’s main building, which will be opened to the public on October 15, museum staff are calling for people to visit the exhibition, saying, “We hope the photo will enable visitors to reflect more deeply on the tragedy that took place 71 years ago.”

The photo was taken on October 29, 1945. It is believed that a member of the United States Strategic Bombing Survey (USSBS) stood near the area where the museum’s main building is now located and faced south to take the photo. The image shows the base of the bell tower of Shoganji Temple, which had been one of the largest temples in the city, and the ruins of Hyotan-ike Pond, where turtles once swam and people of the city relaxed.

The museum obtained the photo from the United States National Archives and Records Administration in fiscal year 2003, but it has not yet been widely displayed. The exhibition at the former Bank of Japan building features items from the museum’s collection, including 38 photos which were recently added to this collection. Among them is the photo taken in the Nakajima district. The exhibition will run until March 2018 (the closing date is not yet fixed) and admission is free.

The museum has also obtained two more photos, one showing the A-bomb Dome building in the northeast and the other showing a cemetery in the northwest, both of which were presumably taken from nearly the same spot as the photo of the Nakajima area. The curator of the museum commented, “Compared to other photos of the Nakajima district, which were taken in the air or from a tall building and offer a bird’s-eye view, there are fewer photos of the destruction left there by the atomic bombing that were taken from the ground. In that light, these three photos are valuable records.”

Last November, the City of Hiroshima entrusted the Hiroshima City Culture Foundation with the task of excavating the grounds of the museum’s main building. This excavation work now continues near the site where Seiganji Temple once stood. Foundation staff have said that they would like to make use of the photos in their investigation of remains buried beneath the ground. On October 15, the excavation site will be open to the public from 10 a.m. to 4 p.m.