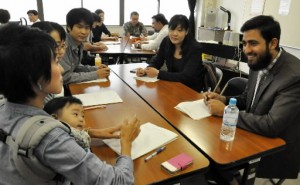 At a gathering held in central Hiroshima, people listened to three Afghans talk about their experiences of that nation’s civil war. They also discussed ideas for promoting a peaceful world. The three Afghans are trainees of the Japan International Cooperation Agency (JICA) and are staying in Higashihiroshima for an extended period of time. Afghanistan is still in the process of reconstruction and needs support in the fields of security and education. The participants of the gathering recognized the importance of learning about conditions in Afghanistan and raising public awareness of this issue.

Following a coup in 1978, the former Soviet Union launched a military invasion of Afghanistan in 1979 in order to further the cause of communism. This was the beginning of the civil war in Afghanistan. Maroof Khushdil, 39, was 3 years old at the time. His house was destroyed in a bombing. Because his school was turned into a military base, he was unable to get an education. His family then fled to Pakistan, a neighboring country. Mr. Khushdil said that war leads to many deaths and poverty. He said he was lucky to have an opportunity to study in the United States in 2006 and added that, through education, people can learn to live in peace.

Wahdatullah Khpalwak, 29, said that the latter half of the 1990s, when the country was under the control of the Taliban, was the worst period of his life. Hospitals were destroyed, and his brother died of illness. His family struggled financially. The regime denied girls access to education. After its collapse, education for girls was resumed, and his sister could learn to write. Mr. Khpalwak said that there are thousands of people who have not been able to gain an education.

Amanolah Ataeey, 28, talked about his experience of being caught by Taliban militants. In 2013, he and his father were traveling by car, on their way to his uncle’s home. When they were stopped by militants, everyone was forced to get out of the car. The driver was killed first. Mr. Ataeey thought he would be killed, too. Instead, he was held captive at a different location and later rescued by local soldiers. He said this was the reality of his homeland.

After these talks, the three Afghans and the Japanese participants were divided into six groups and these groups discussed such themes as “what we can do for the present and future of Afghanistan” and “what we can do to keep Japan safe.” Through this exchange of views, some challenges were identified. One problem involves donations that come to Afghanistan from countries around the world, because some in the privileged class keep these funds for themselves rather than using them to benefit the public.

One person from each group reported on the details of their discussions. To aid Afghanistan, ideas like nurturing ethnic reconciliation through education and pointing to Hiroshima’s example in its recovery from the atomic bombing were proposed. It is also important, the participants said, for people to take part in gatherings where they can listen directly to others, unfiltered through the media, and for the whole nation to show an interest in politics.

Kana Okino, 16, one of the junior writers of the Chugoku Shimbun, took part in the event. She said, “I had never heard such stories before, so there were many surprises for me. We must be aware of the fact that there are people who face hardships like this and are afraid of dying.”

The event was organized by JICA’s Chugoku International Center and the Hiroshima International Center. Thirty-one participants, including students, adults, and junior writers, took part in the event. The three Afghan trainees are studying agriculture or city planning at Hiroshima University.