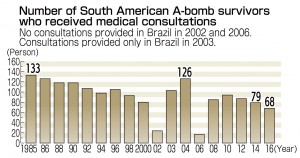 A team of doctors held a press conference at the Hiroshima Prefectural Office on October 28 to report on their activities in South America. Dispatched by the Hiroshima prefectural government, the doctors visited Brazil and four other countries to provide medical checkups and advice for A-bomb survivors living there. Due to aging, the number of survivors who took part in these medical consultations totaled 68. Hiroshima Prefecture has dispatched a team of doctors to South America nearly every two years since 1985. Except for the 2002 and 2006 visits when Brazil, which has many people of Japanese descent, was not included in the program, the number of survivors who received medical consultations has hit new lows for two consecutive visits.

From October 2 to October 15, the team of doctors divided into three groups and paid visits to eight cities in Brazil, Argentina, Paraguay, Peru, and Bolivia. Based on the results of medical tests that survivors underwent at local medical institutions, the doctors examined and gave medical advice to a total of 68 survivors between the ages of 70 and 103 (including three survivors who were counseled by telephone).

The press conference held on October 28 was attended by Keiichi Hiramatsu, the head of the team and president of the Hiroshima Prefectural Medical Association, and two other doctors. Reflecting on his visit, Dr. Hiramatsu said, “Medical consultations given in Japanese were appreciated by the A-bomb survivors because they could describe their symptoms in detail. However, due to aging, there are an increasing number of survivors who have difficulty going out and are not able to visit the examination locations.”

The number of participants fell by 11 from 79, the previous low in 2014. By country, 61 were from Brazil, which accounted for some 90 percent of the total, four from Argentina and one each from Paraguay, Peru, and Bolivia. Dr. Hiramatsu stressed that he would like to continue the program even when the number of participating A-bomb survivors dwindles to only one.

Currently, about 130 A-bomb survivors live in these five South American countries, and the number of survivors who have received medical consultations from prefectural doctors over the years has reached 1,661 to date.