Letter of thanks from U.S. President Obama arrives at Hiroshima Peace Memorial Museum 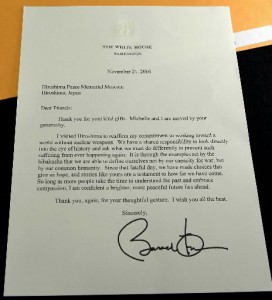 On December 1, a letter of thanks from U.S. President Barack Obama arrived at the Hiroshima Peace Memorial Museum, located in Naka Ward. When the president visited the museum in May of this year, the museum staff presented him with books containing photos and drawings of A-bomb artifacts displayed in the museum. “We have a shared responsibility to look directly into the eye of history and ask what we must do differently to prevent such suffering from ever happening again,” said Mr. Obama in his letter, indicating his commitment to confront the destruction that resulted from the atomic bombing.

The president’s letter was dated November 21. Following words of appreciation for the gifts, the president wrote, “I visited Hiroshima to reaffirm my commitment to working toward a world without nuclear weapons.” The letter concludes, “So long as more people take the time to understand the past and embrace compassion, I am confident a brighter, more peaceful future lies ahead,” and is personally signed by President Obama.

During his visit to Hiroshima, Mr. Obama spent 10 minutes in the museum looking at the exhibits which convey the catastrophic consequences of the atomic bombing. The museum presented him with two books which depict the effects of the bombing and a framed picture of a charred lunch box that belonged to a student who became an A-bomb victim. Kenji Shiga, the director of the museum, said, “When he visited the museum, President Obama sought to face the catastrophe caused by the atomic bomb squarely. I trust that the president’s memories of his visit to Hiroshima will be rekindled each time he looks at the books we gave him. I sincerely appreciate the genuine and heartfelt way in which he has confronted the atomic bombings of Hiroshima and Nagasaki.” The same books were also given to Michelle Obama, who was not able to accompany the president on his visit to Hiroshima that day.

A thank you letter containing the same text and dated November 7 was also sent to Fumie Takahashi, 79, a resident of Nishi Ward. Before the president’s visit to Hiroshima, she made a wreath of 1,000 paper cranes using red, white, and blue origami paper, the colors of the American flag, and arranged for Hiroshima city officials to present her work of art to President Obama. Ms. Takahashi said she hopes Mr. Obama will continue to work for peace in the world after his time as president ends.