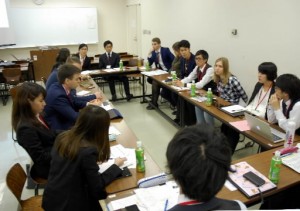 On December 1, the “Japan-Russia Student Forum 2016,” in which young people from Japan and Russia promote friendship and mutual understanding, opened at Hiroshima City University, located in Asaminami Ward. Thirty people from the A-bombed nation, including ten students attending Hiroshima City University, and 30 people from Russia, a nuclear weapon state, took part in the forum. They discussed, in English, abolishing nuclear weapons, eradicating terrorism, and strengthening grassroots relations between Japan and Russia.

Following a lecture on the state of nuclear weapons in the world by Yasuhito Fukui, an associate professor of the Hiroshima Peace Institute at Hiroshima City University, representatives of the students from Japan and Russia expressed their views. Masaya Yanagimoto, 27, who studies international relations at the graduate school of the University of Tokyo, said, “Russian President Vladimir Putin will visit Japan in the near future, and relations between Japan and Russia are approaching a turning point. Along with diplomacy by our leaders, diplomacy by citizens, involving young people, is also very important.”

The participants of the forum then split into groups and engaged in discussion. Anton Tugushev, 23, who studies the control of radioactive material at a university in Moscow, said that creating a peaceful future without nuclear weapons was a common goal and that he wants to explore what young people can do to advance this aim. Kana Miyoshi, 22, a senior in the Faculty of International Studies at Hiroshima City University, said, “My grandmother experienced the atomic bombing. I hope this forum will also be an opportunity for young Russian people to learn about the experiences of the A-bomb survivors.”

The participants will end their discussions on December 2 and visit the Hiroshima Peace Memorial Museum, located in Naka Ward, and other sites.

The Japan-Russia Student Forum is a friendship program organized by the “Japan-Russia Youth Exchange Center,” which was established in line with an agreement made at a Japan-Russia Summit Meeting in 1998, and other organizations. To date, the forums have been held seven times in Moscow, Sapporo, and other locations, and the participants have discussed such topics as global warming and the political participation of young people. It is the first time that the forum has been held in Hiroshima.