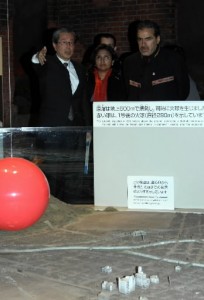 On December 2, Juan Carlos Alurralde Tejada, 52, Deputy Minister of Foreign Affairs of Bolivia, made his first visit to the Hiroshima Peace Memorial Park in Naka Ward. Mr. Alurralde toured the Peace Memorial Museum and stressed that human beings must never forget such a tragic event.

Mr. Alurralde was guided through the museum by Yasuyoshi Komizo, the chairperson of the Hiroshima Peace Culture Foundation. There, he studied a model which depicts the devastated city center in the aftermath of the atomic bombing. He then laid a wreath of flowers at the Cenotaph for the A-bomb Victims, and gazed at the A-bomb Dome from the opposite bank of the Motoyasu River.

Bolivia is a signatory to the first nuclear-weapon-free-zone treaty in the world (the Treaty of Tlatelalco, which came into effect in 1968) along with other nations in Central and South Africa. Mr. Alurralde said, “I could feel the powerlessness of human beings. In my view, conflicts must be resolved through dialogue.” He arrived in Japan on November 29, at the invitation of Japan’s Ministry of Foreign Affairs.