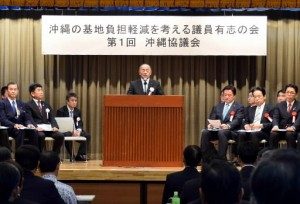 An association of municipal assembly members who are concerned about Okinawa’s burden in hosting U.S. military bases held a meeting in Naha, Okinawa Prefecture on December 3. The participants learned about the circumstances surrounding issues related to military bases located in Okinawa and decided to continue their efforts and spread the scope of their activities to the whole country. A total of 54 members from 17 municipalities, most of which host U.S. bases, came to the meeting from Okinawa and other prefectures. It was the first meeting in Okinawa held by this group, which is headed by Toshiyuki Kuwahara, the chairperson of the Iwakuni City Council in Yamaguchi Prefecture.

From mainland Japan, members of 10 municipal assemblies attended the meeting, including those from Iwakuni, which hosts the U.S. Marine Corps Air Station Iwakuni, and its surrounding areas of Waki, Otake, Higashihiroshima, and others. From Okinawa, members of seven assemblies, including Ginowan, where the U.S. Marine Corps Air Station Futenma is located, Naha, and others were in attendance.

In his speech, Mr. Kuwahara said, “This is the first step in involving the whole nation in the discussion of Okinawa. Let’s have a candid discussion about distributing trainings (of the MV22 tilt-rotor Osprey transport aircraft) and other topics.” State Minister of Defense Kenji Wakamiya, who was a guest for the occasion, said, “Reducing the burdens of hosting military bases is one of the major challenges for the Cabinet of Prime Minister Shinzo Abe. I hope nationwide efforts will be made.”

Atsushi Sakima, the mayor of Ginowan, said that noise pollution in the city was alleviated by 15 to 20 percent after the relocation of KC-130 air refueling tankers from Futenma to Iwakuni was completed in August 2014. He also said that the land occupied by the air station should be returned as soon as possible.

At the end of the meeting, the participants adopted a resolution with their applause. The resolution calls for efforts to gain a better understanding of the burden of hosting military bases and to involve the whole nation in the discussion of how to ease this burden.

The association of council members was launched in May in response to a call by Mr. Kuwahara. The chairpersons of 15 municipal assemblies around the country serve as the group’s facilitators.