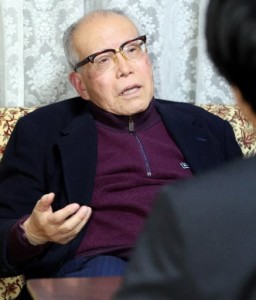 This year marks the 75th anniversary of the start of the Pacific War in 1941. On December 5, the Japanese government announced that Prime Minister Shinzo Abe will visit Pearl Harbor in the U.S. state of Hawaii, the first sitting Japanese leader to do so. While Mr. Abe told reporters that he would like to affirm the value of reconciliation, some U.S. veterans and A-bomb survivors are urging him to show remorse for Japan’s actions, which triggered the war, while others are criticizing him for taking so long to make the visit. Will the prime minister’s historic visit be a new step forward to mark the end of Japan’s bitter history?

In May of this year, 71 years after the atomic bombings of Hiroshima and Nagasaki, U.S. President Barack Obama visited Hiroshima, becoming the first U.S. president to take this step. Both President Obama and Prime Minister Abe visited the Hiroshima Peace Memorial Park to offer flowers at the Cenotaph for the A-bomb Victims and vow to pursue “a world without nuclear weapons.”

On December 5, Shigeaki Mori, 79, who was embraced by Mr. Obama during a short exchange between the two men after the president spoke, told reporters at his home in Nishi Ward that Mr. Abe’s visit to Pearl Harbor is an important and positive decision. Mr. Mori has been engaged in a long investigation to learn about the American soldiers who were killed by the atomic bombs in Hiroshima and Nagasaki, and has paid tribute to their deaths. He urges both leaders to reflect with humility on how the two countries became entangled in the war and unite in their desire to create a peaceful world without war.

Toshiyuki Mimaki, 74, the vice chair of the Hiroshima Prefectural Confederation of A-bomb Sufferers Organizations (Hidankyo, chaired by Sunao Tsuboi), who was nearby the site of the ceremony on the historic day Mr. Obama visited Hiroshima, recognizes the value of the prime minister’s visit to Pearl Harbor but, at the same time, is paying close attention to his words and deeds. Mr. Mimaki said, “I’d like Mr. Abe to express some remorse for the fact that Japan started the war. If his language is ambiguous, there will be no progress in this matter in the future.”

There are some who view Mr. Abe’s decision as a reaction to Mr. Obama’s visit to Hiroshima. Kazuo Okoshi, 76, the secretary general of the other Hiroshima Hidankyo (chaired by Kunihiko Sakuma), said, “Mr. Abe’s visit should not be given too much weight. If the focus is only superficially on the mutual visits to Hiroshima and Pearl Harbor by the two leaders, the fact that little progress has been made with respect to reducing nuclear weapons could be overlooked.”

Haruko Moritaki, 77, co-chair of the citizen’s group the Hiroshima Alliance for Nuclear Weapons Abolition, commented, “The attack on Pearl Harbor by Japan and the A-bomb attacks on Japan by the United States are different in that the latter were cases of indiscriminate mass murder. I’m very concerned that the inhumane consequences of the atomic bombings might not be fully recognized if these events are treated equally.”