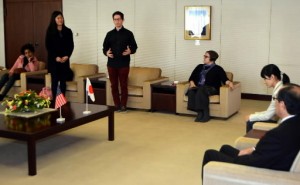 A group of 17 students and two teachers from DePaul University in the U.S. city of Chicago visited Hiroshima Mayor Kazumi Matsui at Hiroshima City Hall on December 6 and told the mayor that peace messages sent from Hiroshima are helping to raise awareness of nuclear arms reduction. The students and teachers are in Hiroshima City to learn about peace.

The students’ visit to Hiroshima is part of the “Hiroshima-Nagasaki Peace Study Course,” which the A-bombed cities of Hiroshima and Nagasaki encouraged the university to establish. Since December 2, they have been learning about the catastrophic damage caused by the atomic bomb by visiting the Peace Memorial Museum in the Peace Memorial Park, located in Naka Ward, and listening to A-bomb survivors talk about their experiences of the bombing. During their visit to Hiroshima City Hall, they were encouraged by Mayor Matsui to convey what they have seen and heard in Hiroshima, about the horrific consequences of the atomic bombing, to other young people and the generations to follow.

They also showed interest in the December 5 announcement of the upcoming visit to Pearl Harbor in Hawaii by Japanese Prime Minister Shinzo Abe. Sarah Labarbera, 20, a second-year university student, told reporters that Mr. Abe’s visit will remind President-elect Donald Trump of how important it is to have a generous spirit.

The students’ study program in Hiroshima has been led by Yuki Miyamoto, 48, an assistant professor at DePaul University who is originally from Naka Ward. The current visit marks the sixth such visit since 2005, when the university first sent students to Hiroshima to take part in the program. The students finished their studies in Hiroshima on December 6 and will move to Nagasaki on December 7.