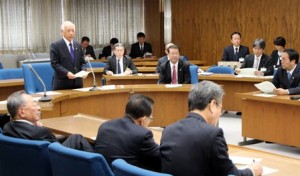 On December 9, like-minded nonpartisan lawmakers in the Hiroshima Prefectural Assembly, with a quorum of 64 members, established a group called the Parliamentarians for the International Peace Contribution, which aims to advance studies and research for a world without nuclear weapons. As of that date, 55 lawmakers have decided to join the group.

For the group’s inaugural meeting, 51 lawmakers took part. After choosing 10 executive members, the participants unanimously approved its objective of engaging in political activities to support the cause of nuclear abolition. They will determine their concrete activities by the next general assembly meeting, to take place in January.

Nobuya Okuhara, a member belonging to the Liberal Democratic Party and a resident of Kure, Hiroshima Prefecture, assumed the post of chair. After the meeting, Mr. Okuhara said, “We would like to propose policies from the A-bombed city of Hiroshima that can advance momentum for global nuclear abolition as much as possible and bring about tangible results.”