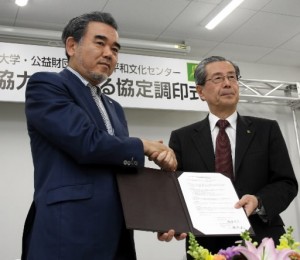 On December 12, Hiroshima University and the Hiroshima Peace Culture Foundation concluded a comprehensive partnership agreement. The two organizations will promote cooperation in the areas of surveys, research, and education, with the aim of handing down memories of the damage caused by the atomic bombing to future generations, and delivering a peace message more broadly.

The signing ceremony took place at the university’s Higashisenda campus in Naka Ward, with Mitsuo Ochi, president of Hiroshima University, and Yasuyoshi Komizo, chair of the Hiroshima Peace Culture Foundation, signing the agreement. Mr. Komizo stressed that their message could be conveyed to the international community more effectively by making use of the university’s knowledge and networks. Mr. Ochi said, “I would like all our students to have the opportunity to think more about peace. I hope this agreement can help communicate the true consequences of the atomic bombing to future generations.”

In line with the agreement, the two organizations will work together on five objectives, which include planning education and training programs, transmitting information on the real conditions of the A-bombing and on peace building, and rejuvenating the foundation’s activities. As one example, Hiroshima University will lend support in translating messages from various nations addressed to the Peace Memorial Museum, the facility managed by the foundation. With regard to materials related to the bombing, held respectively by both organizations, they will consider ways to share such materials with one another.